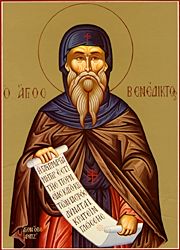 The first layer of the habit is the tunic, which is secured in place by a belt. This is the form of habit worn by oblates during their period of novitiate. The next layer is the monastic scapular, which is a tabard-like garment worn over the tunic. The tunic, belt, and scapular, (with a head-veil for women), form the complete habit worn by oblates while in the monastic enclosure and by monastics during the Novitiate. Outside of the monastery, the oblates simply wear a reduced scapular and the Saint Benedict Medal under civilian clothing. When the monastic makes his solemn profession, he is tonsured and invested with the cowl.

There are currently at least five Benedictine monastic houses within the Orthodox Church, namely Our Lady of Mount Royal, under Abbot Augustine (Whitfield); the Christ the Saviour Monastery (or Christminster) is a Benedictine monastery of the Russian Orthodox Church Outside Russia and is currently under Abbot James (Deschene); and the Abbey of the Holy Name with its daughter house of St John the Theologian. In addition, an oblate programme exists at Saint Benedict Russian Orthodox Church in Oklahoma City, Oklahoma. All of these houses and the parish in Oklahoma City are either under the jurisdiction of the Russian Orthodox Church Outside Russia or the Holy Synod of Milan. Within the United States of America, the Antiochian Orthodox Christian Archdiocese of North America, while having no monastic houses, does have a number of parishes that run an oblate programme.

The word oblate derives from the Latin oblatus, which means "one offered". Oblates of Saint Benedict offer themselves to God in much the same way that monks and nuns do, except that they do not take monastic vows or necessarily live within the monastic enclosure. Rather, they make a commitment to God, in the presence of the monastic community (or the parish community, depending on circumstances) to strive to live according to the Rule of St. Benedict as adapted to suit their own life situations. Usually, the rule is adapted according to the individual spiritual and practical needs of each oblate by the abbot or oblate master of the monastery to which he or she is to retain a bond of practical support and spiritual obedience.