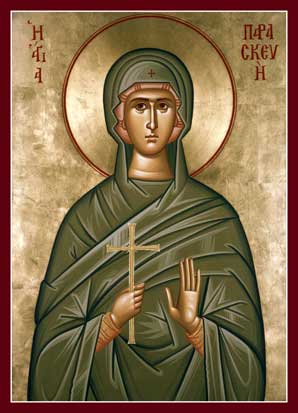 When she was 20 years old, both her parents died leaving her as the sole heir to the family fortune. St Paraskevi did not use her fortune for herself. Filled with the spirit of Christ and Christian ideals, she sold all her worldly possessions using the money to relieve human suffering. There was a portion retained to a community treasury that supported a home for reverent virgins who stayed in a kenobion, a type of commune like a contemporary monastery. These women prayed and fasted doing charitable works. They preached primarily to Hebrew and idol worshiping women giving them an opportunity to learn about Christian salvation.

According to the tradition of the people of Epirus, Paraskevi was not martyred in Rome as mentioned in her traditional hagiography, but in Thesprotia where the Monastery of Saint Paraskevi of Pounta stands today. According to this tradition, strongly held by the locals, the headless body of the saint was entombed here and her tomb is still venerated today.

It is said that the persecutors of St. Paraskevi dragged her to the edge of the river Acheron to behead her. As the sword was raised over her head, she grabbed a stone pillar that she held so tightly that the print of her hands melted into it leaving an indelible mark. A church was eventually erected here by the faithful in her honor and housed her holy relics. Her skull was eventually placed in the walls of the church, though today it is kept in Moni Petraki in Athens.

According to the author and novelist Spyros Mouselimis, in his article "The Monastery of Pountas and the Feast of Saint Paraskevi" (Ηπειρωτική Εστία, 10, pp. 638-641, 1961), Pountas Monastery was known for its healing waters and numerous miracles. The pilgrims would cut off portions of the stone pillar of St. Paraskevi as a talisman, to the point that in 1960 the size of the stone was half its original size.

The property of the Monastery at one time was very great. According to Lambridis, at the end of the 19th century the annual revenue of the Monastery was 20,000 piastres, from which a boarding school was supported on its premises until 1913. After the population exchange of 1923 the Monastery was abandoned and did not operate again until 1975. Only the eastern side of the original Holy Altar area of the Katholikon survives today, while the rest of the church was restored in 1989 together with the inscription for the tomb of St. Paraskevi.

Today the Monastery operates as a female convent.