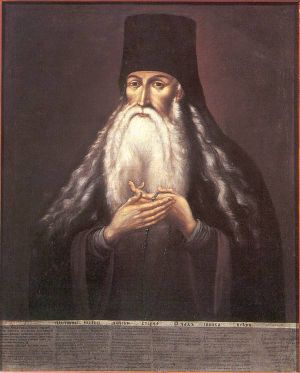 Our venerable father Paisius Velichkovsky, also Paisius of Neamt, led the renaissance in Orthodox monasticism in the late eighteenth century, helping the Church recover from the decline in monastic life and spirituality caused by the troubles and conflicts of the previous centuries. His effort was centered on the spirituality of the hesychastic tradition, which was expressed in the popularity of counseling by starets (elders) in nineteenth-century Russia. His feast is celebrated on November 15.

The future elder and saint Paisius was born on December 20, 1722, in the city of Poltava into a pious family of priests. He was baptized with the name Peter. His father John was the rector of Dormition Cathedral. His mother Irina became a nun later in her life. Peter was a quiet boy who loved to read. At an early age he read every spiritual book at home and in the cathedral library.

Peter entered the Kiev Theological School when he was thirteen. After two years, his interest in his studies waned, and he found that his interest in monasticism had grown stronger. He was intent on entering a monastic life even over the objections of his mother. He wandered, visiting a number of elders, before entering the Medvedovsky monastery, where he worked at many simple tasks. In time he was tonsured to the rassa with the name Platon. Conflicts with the Uniates caused the monastery to close, and Platon traveled to the Kiev Lavra, to work in its printing shop.

Still in a search of ascetic labor and a life as a hermit, Platon journeyed to the monasteries in Moldovlachia that had been influenced by the spiritual life of the monasteries of Mount Athos. At the age of twenty-four, Platon traveled to Mount Athos, there to reside in the Pantocrator Monastery for the next four years, living in a life of ascetic poverty. In 1750, Platon was tonsured to the mantle with the name of Paisius by his spiritual father, Schema-monk Vasilius, who had come to Mount Athos from Moldavia.

Soon, Vissarion and Cesarius, his first spiritual students, joined Paisius. At the age of thirty-six, Fr. Paisius was ordained a hieromonk in 1758. As his community of monks grew, Hiero-schemamonk Paisius asked Pantocrator Monastery to give him the use of the cell of Prophet Elias, which then grew to become the Skete of Prophet Elias. As his community grew, Elder Paisius became the spiritual father of not only his brotherhood but of many throughout the Holy Mountain. As the community grew beyond fifty members, frictions with others on the mountain as well as over running the capacity of their skete made living conditions difficult. To alleviate the difficulties Elder Paisius, at the recommendation of many of the residents, moved his community to the empty Monastery of Simonopetra. But, after three months the community returned to the Skete of Prophet Elias, as Simonopetra had been empty, because the earlier community had moved out due to not being able to pay the taxes demanded by the Turkish authorities. The Turks now wanted Elder Paisius and his community to pay these taxes.

After seventeen years on the Holy Mountain, Elder Paisius then decided to move his brethren to Moldovlachia in Moldavia. In 1763, with sixty-four monks, Elder Paisius moved to the Monastery of the Holy Spirit in Dragomir, Bukovina. Here, they restored the monastery and established a new life under the monastic rule for services they had used at Mount Athos. The community served in two languages: on the right kliros they sang in Slavonic, and on the left, in Moldavian.

A war between Russia and Turkey caused the brotherhood to evacuate to Sekul when Dragomir came under the control of Austria. It took some time for life in Sekul to settle down. While they were busy helping refugees, the monks also developed differences amongst themselves that needed settlement. Even with the small and inadequate facilities at Sekul for the community, Elder Paisius began his translations of the Patristic Fathers. To relieve the crowding, Prince Konstantin, with the blessing of Metr. Gabriel, offered the brotherhood the opportunity to move to Niametz [ro:Neamț]. At first hesitant to move again, Elder Paisius agreed to move in 1779.

In making the move, he left some of the monks at Sekul while moving himself and the others to Niametz Monastery. With this move he began the final period of his life, but one that would be his most fruitful. By this time his community of monks had grown to over 700. The spiritual life at Niametz Monastery and that of the Elder Paisius became known throughout the Orthodox East. The monastery facilities expanded with building of a hospital, a house of mercy, and additional cells for the monks. Under the Elder's guidance, transcribing and translating works of the Holy Fathers was undertaken. In this task he was aided by a large number of monastic assistants whom he taught Greek.

Yet the wars among the Turks, Russians, and Austrians continued to interrupt his work. In the late 1780s, the Turks occupied Niametz but soon were driven out by the Austrians. This was followed by the arrival of Russians. It was at this time in 1790 that Abp. Ambrosius of Slovenia and Poltava came to Niametz and at a Divine Liturgy elevated the Elder to the rank of archimandrite.

With the cessation of the war, life settled down at the monastery. Fr. Paisius and his monks returned to their work. Soon, however, the Elder began to weaken, and eventually he stopped his translation work. On November 5, 1794, he took a turn for the worse and took to his bed. His illness continued, and on November 15, 1794, he died at the age of seventy-two.

Schema-archimandrite Paisuis was glorified on July 20, 1982, the feast day of the Holy Prophet Elias, at the Skete of St. Elias on Mount Athos, the skete founded by St Paisius.

The Schema-archimandrite Paisuis is remembered for initiating the revival in the late eighteenth century of monasticism in Russia and the Orthodox East that was to expand during the next century. This legacy came from a remarkable set of talents that merged in him to produce an re-invigoration of Orthodox monastic life. These talents included his personal holiness combined with love for education, his ability to organize coenobitic monastic life, his ability to attract and teach many students, his skill in creating a school of spiritual asceticism, and his great literary talent in the task of correcting old translations and making new translations of the ascetic literature of the Holy Fathers. His students became influential among the monks in Moldavia and Russia well as on Mount Athos itself.

"The enemy likes to hide the truth and to mix good with evil. But how can one find out the truth? God's goodwill and all our intentions are meek, full of good hope, and undoubting. Not only in our good deeds, but also in our lawlessness, God endures long with meekness and awaits our repentance. And how can one distinguish the impulse of the enemy? The enemy usually hinders us and turns us away from good. However, if in anything which apparently is good, the mind is disturbed and causes us disturbance, banishes the fear of God, deprives us of calmness, so that without any reason the heart aches and the mind wavers, then know that this is an impulse from the enemy and cut it off."

"Remember, O my soul, the terrible and frightful wonder: that your Creator for your sake became Man, and deigned to suffer for the sake of your salvation. His angels tremble, the Cherubim are terrified, the Seraphim are in fear, and all the heavenly powers ceaselessly give praise; and you, unfortunate soul, remain in laziness. At least from this time forth arise and do not put off, my beloved soul, holy repentance, contrition of heart and penance for your sins."