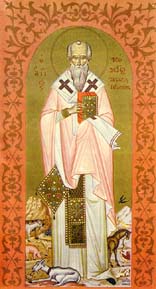 Our father among the saints Modestus of Jerusalem was the Patriarch of Jerusalem from 632 to 634. He is commemorated on December 18.

He was born in Cappadocian Sebasteia (Asia Minor). His parents died when he was five months old. Brought up a Christian, he was strongly attracted to a strict monastic life and accepted a monastic tonsure. He began an ascetic life at Mount Sinai. Later, he became the abbot of the Monastery of St. Theodosius Coenobiarchus, which is east of Bethlehem, in Palestine.

In 614, Syria and Palestine were invaded by the forces of the Persian king Chosroes II. The invading force killed tens of thousands of Christians and destroyed most of the churches. Many Christians were taken captive, including Patr. Zacharias and the True Cross and taken to Persia. While Patr. Zacharias was captive, Abbot Modestus governed the patriarchate as locum tenens until his return to Jerusalem fourteen years later.

During this period Modestus began the job of restoring the devastated Christian city. With the help of Patr. John the Merciful of Alexandria, Modestus set to the job of burying the murdered monks of the Monastery of St. Sabbas the Sanctified, Church of the Holy Sepulchre, the Church of the Paralytic, and many others.

In 628, emperor Heraclius defeated Chosroes and compelled him to return the True Cross along with the Christian survivors and Patr. Zacharias. Patr. Zacharias spent the remaining years of his life in peace and reposed in 632. Modestus was chosen to succeed Patr. Zacharias and was patriarch until his death in September 17, 634, at the age of 97. Patr. Modestus was buried in the Church of the Eleona on the Mount of Olives.