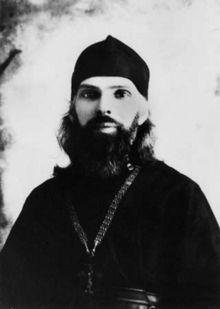 Father Vladimir was born on May 26, 1885 in Dukhovshchina, Smolensk Governorate, to a family of doctors. His mother Varvara Karlovna (née Scheidemann), was the daughter of a Lieutenant-General who was a hero of the Crimean War, the artillery commander in the Battle of Evpatoria, descended from a Russified wealthy German family. She was one of the first women in Russia who received a medical degree; she studied Female medicine and graduated from the St. Nicholas Military Hospital. His father, who was of Polish descent, was a doctor in the Putilov Plant.

In 1888 his mother contracted typhus and died. The family then moved to St. Petersburg. Vladimir was an extraordinarily kind and unselfish child. He was characterized by an innate aristocracy, and was well versed in European languages.

In 1904 Vladimir graduated from the high school of the Imperial Philanthropic Society, and immediately entered the Faculty of Law of the University of St Petersburg.

In 1910 he began his service in the Senate. Simultaneously, the young lawyer studied the history of archives, and two years later he graduated from the St. Petersburg Archeological Institute.

When World War I began, Vladimir tried to get to the front, but was not accepted into active service due to health reasons. In his position as assistant chief of the Petrograd Sanitary Motorcade, he directed the transportation of wounded people from St. Petersburg train stations to hospitals.

In 1920, Vladimir was admitted to the first year of the Theological Institute in St. Petersburg, and in November filed a petition for ordination. After his ordination, he served in the University's Church of All Saints in 1923, as Rector of the church.

Vladimir was subjected to constant arrests. In 1924 he was arrested and accused of participation in the "Spasskoye Brotherhood". However his family sent a petition to the authorities claiming that he was suffering from a serious mental illness, thereby gaining his release. One theory was that his relatives struck this deal with the authorities by admitting a mental disorder in order to free him, however none of his friends considered him mentally ill. When Vladimir testified, his answers were clear and restrained, and he always displayed a deep understanding of the subject matter at hand, and gave the impression of a balanced, thoughtful and legally educated person. It was evident while he was testifying that he never attempted to slander anyone.

In February 1925 he was arrested again and sentenced to ten years in labor camps, on charges of being involved in a monarchical plot, because he had served Memorial Services (панихида) commemorating the Imperial Family. Father Vladimir and another 34 people were originally sentenced to death, but were later exiled for ten years to the Solovetsky concentration camp. Father Vladimir endured camp life humbly and meekly and was friendly and kind. According to the memoirs of fellow prisoners аt Solovki, the aristocraticism of his behavior did not disappear even then; he performed various tasks such as "weighing out stinking fish" in a food stall, carrying parcels, or washing toilets. He became friends with father John Steblin-Kamensky and Michael Yavorsky, who were arrested in the case of the "Orthodox Brotherhoods" and had arrived at Solovki before him. Subsequently, they also accepted martyr's deaths.

At Solovki Father Vladimir was visited by his relatives, who helped him gain a reduction of his sentence. In November 1928 his sentence to the camp was replaced by five years exile in Siberia. After spending several months in a transit prison in Leningrad, father was sent to the remote village of Pyanovo, which is 150 kilometers from the city of Bratsk, Irkutsk oblast. Here, Father Vladimir lived together in exile with bishop Basil (Zelentsov), an implacable opponent of Metropolitan Sergius.

After his release Father Vladimir served in Novgorod and became rector of the Cathedral of the Archangel Michael (1934-1935). The ruling Bishop of the Novgorod diocese at that time was Archbishop Benedict (Plotnikov), who was familiar to Father Vladimir from joint service in Petrograd.

On May 14, 1936 Archpriest Vladimir was arrested again and sent for examination to the regional hospital for the mentally ill, where he was found sane.

On December 8, 1937 he was arrested again along with with a group of parishioners, pursuant to Article 58, on charges of being members of the "people's democracy based on neostate capitalism" group. Archpriest Vladimir Lozina-Lozinski pleaded not guilty, stating that the existence of this group had not been confirmed, and that he had slandered no one. However, on December 19, he was sentenced to death by decision of the special "NKVD troika", and on December 26, 1937 he was shot in the Novgorod region.

The place of his burial remains unknown.

He was canonized and included among the New Martyrs and Confessors of Russia at the Jubilee Bishops' Council of the Russian Orthodox Church in August 2000, for general church veneration.