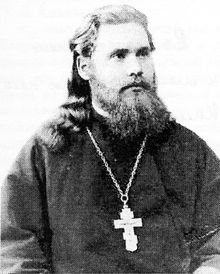 Archbishop Benedict as a priest - 1919

His Eminence Benedict (Plotnikov) of Kazan was a hierarch of the Church of Russia during early decades of the Soviet Union. He served as Bishop of Kronstadt and Archbishop of Vologda, Novgorod, and Kazan before his martyrdom.

Archbishop Benedict was born Victor Vasilevich Plotnikov. His birth statistics and early life are unknown. In 1918, Father Victor was appointed rector of St. Nicholas Cathedral in Petrograd (St. Petersburg). He was also tonsured a monk the same year and given the name Benedict. On August 15, 1920, he was consecrated Bishop of Kronstadt, vicar of the Eparchy of Petrograd under the jurisdiction of Metropolitan Benjamin of Petrograd. In 1922, he was arrested on charges of resisting the confiscation of church valuables.

On July 5, or 6, 1922, Bp. Benedict, along with Metr. Benjamin, who was convicted of "organizing a counter-revolutionary group having set himself the aim of struggling with Soviet power", and eight other persons were condemned to be shot.[1] Bp. Benedict and five others were granted reprieves before Metr. Benjamin, Archimandrite Sergius, George Novitsky, and John Kovsharov were summarily murdered on July 31, 1922. At the end of 1923, Bp. Benedict was released under an amnesty as temporary administrator of the |Leningrad Diocese. By decision of Patriarch Tikhon and the Holy Synod on January 29, 1924, Bp. Benedict was instructed to exercise interim management of the Olonets Diocese, a responsibility he held until December 18, 1925. [2]

On April 29, 1926, Bp. Benedict was deported to Kazakhstan, for a period of three years for the storage and dissemination of anti-Soviet religious literature, by a special meeting of the OGPU of the NKVD.

On December 20, 1936, Abp. Benedict was installed as Archbishop of Kazan and Sviazhsky. On February 2, 1937, he was again arrested and, on August 16, 1937, he was executed in Leningrad by shooting and was buried in what is now the memorial cemetery, Levashovskaya, near St. Petersburg, Russia.