The Holy Martyrs Timothy and Mavra

The holy and glorious martyrs Timothy and Mavra (or Maura) were a newly-married Christian couple who suffered martyrdom in the year 286, under Arianos, the pagan governor of Thebaid, during the reign of Diocletian, in Thebes, Egypt. The Church celebrates their feast day on May 3.

Under some accounts Timothy was a priest of the Church, but in most he was a reader. He was married to Mavra, a devout Christian woman from a very pious Christian family. Timothy was known for his great piety and knowledge of the Holy Scriptures. Many times at night after the day's work, villagers would gather around Timothy where he would read to them from the Scriptures.

After only 20 days of marriage, Timothy was summoned to the pagan governor Arianos, to be brought to trial for his Christian teaching and missionary work. At first, he was asked to surrender all of his sacred books in order for them to be destroyed. Timothy refused, for he knew their value and power. "If a father who loves his children," he said, "and who obeys the natural law does not deliver up to death his fleshly children, how can I give over my spiritual children, the sacred books, into your polluted hands?" He was punished harshly and inhumanely for his courage but he regarded the tortures as honors, since they would bring him eternal bliss. The governor commanded that Timothy be pierced through the ears with iron rods, so that the pupils of his eyes leapt out with the pain. He was also hanged by his feet and his mouth was stuffed with wood. His wife also was cruelly tortured after she was asked to use her "womanly gifts" to persuade her husband to deny Christ. Instead, she gave Timothy strength and encouragement during his suffering. This enraged Arianos even more and he began to think of even more barbaric tortures. Mavra's hair was pulled out and her fingers were cut off. As she was being tortured, she prayed for her tormentors. She was then put in a cauldron of boiling water which did not affect her.

During all of these tortures, the saints both saw visions of angels which comforted them. As they were both led to their death by crucifixion, they both kissed their crosses on which they were to be martyred. Nailed to their crosses facing each other, each comforted the other for nine days as they hung. After nine days of hanging on their crosses glorifying the Lord, these newlyweds gave up their souls and entered eternal life. They beheld a vision of angels pointing to thrones in heaven next to Jesus Christ waiting for them.

Miraculously, the heartless Arianos later repented, became a Christian, and was martyred for Christ. The church celebrates his feast day on December 14. 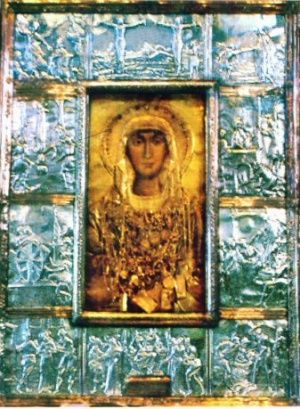 Miracle-working icon of St. Mavra from her church in Zakynthos, Greece

A church dedicated to St. Mavra can be found on the island of Zakynthos, Greece. St. Mavra's miracle-working icon is located there. The icon was originally from Egypt. In Zakynthos, a shepherd had found the icon in a small ravine when he saw a bright light emanating from the area. Three times he took the icon with great reverence back to his village but each time it would miraculously return to the spot where he had found it. It was determined that it should be left there and a church should be built on that spot, where it still stands today (the village of Maherado).

The present church was rebuilt in 1631 after a great earthquake destroyed most of the original church. In 1953 another great earthquake damaged the church, but it was rebuilt by the devout Christians of the island. Along with the feast day on May 3, the island of Zakynthos also celebrates another feast for the saints on the Sunday after Pentecost.

Your holy martyrs Timothy and Mavra, O Lord,
Through their sufferings have received incorruptible crowns from You, our God.
For having Your strength, they laid low their adversaries,
And shattered the powerless boldness of demons.
Through their intercessions, save our souls!

You accepted many humiliations,
And deserved to be crowned by God.
Great and praiseworthy Timothy and Mavra,
Intercede with the Lord for us
That we may celebrate your most pure memory;
That He may grant peace to our land and people,
For He is a powerful stronghold for the faithful!