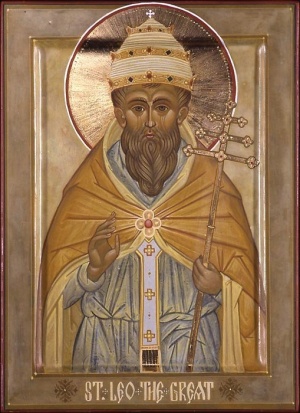 St Leo the Pope of Rome.
Our father among the saints, Pope Leo I, or Saint Leo the Great, was an aristocrat who was Pope of Rome from 440 to 461. He is the first widely known pope, and even sometimes assigned the title "first pope." He stopped the invasion of Italy by Attila the Hun in 452 by his moral persuasion, and was a theologian. His feast day is commemorated in the East on February 18, but by Western Orthodox on November 10.