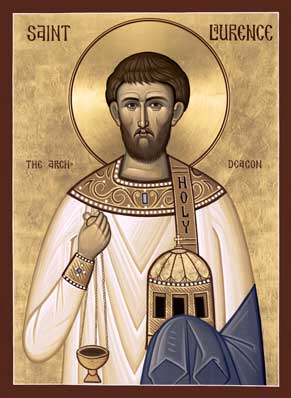 Archdeacon and Martyr Lawrence
The holy, glorious and right-victorious Archdeacon and Martyr Saint Lawrence (Latin: Laurentius, laurelled) was one of the seven deacons of the Church of Rome and a companion of Pope Martyr Sixtus II, all of whom were martyred under Christian persecution by the Emperor Valerian in the year 258. He is especially remembered for his charitable work for the poor. The Church commemorates him on August 10.

Little is known about St. Lawrence. His Acts were lost by the time of Augustine. Legend states that he was a native of Northern Spain, who had received instruction from St. Sixtus while he was an archdeacon in Rome. When Sixtus rose to the papacy in 257, Lawrence was ordained a deacon and was charged with the administration of ecclesiastical alms for the poor.

Martyrdom and the Jewels of St. Lawrence

In early August of 258, the Emperor Valerian issued an edict commanding that all bishops, priests, and deacons should be put to death immediately without trial ("episcope et presbyteriet diacones incontinenti animadvertantur"1). This command was immediately carried out throughout the city of Rome. On August 6, Pope Sixtus was arrested in the catacombs and executed with his two other deacons, Felicissimus and Agapitus. Lawrence is purported to have said as they were being led to torture, "Where are you going, Holy Father, without your son? Where, O Bishop, without your archdeacon? Before you never approached the altar of sacrifice without your servant, and now you are going without me?" St. Sixtus was said to have prophesied that he would follow them soon after.

The imperial authorities soon came to St. Lawrence to demand access to the church treasury. In the course of three days after the death of the Pope and his fellow archdeacons, St. Lawrence worked quickly to distribute as much of the ecclesiastical monies to the poor as possible. On the third day, at the head of a small tribunal, he presented himself to the prefect, and when ordered to give up the treasures of the Church, he led them to a room. There he presented the poor, crippled, and maimed, proclaiming, "Behold the jewels of the Church! The Church is truly rich, far richer, than your emperor."

On August 10, St. Lawrence was perfected in holy martyrdom, grilled on a gridiron for his faith. Legend says that he was so strong-willed that, instead of giving in and releasing information to the Romans at the point of death, he cried, "I’m done on this side! Turn me over and eat!"

In iconography, he is often depicted holding his gridiron.