John (Mitropolsky) of the Aleutians 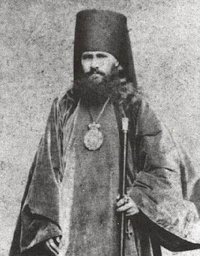 Bp. John (Mitropolsky) of the Aleutians

His Grace the Right Reverend Bishop John (Mitropolsky) of the Aleutians was the first ruling hierarch assigned to the Russian diocese of the Aleutian Islands and Alaska, an event which signaled the growth in importance of the mission in Alaska from being an auxiliary of a diocese centered in eastern Russia.

As part this administrative move, Bp. John moved the see from Sitka to San Francisco in 1872, bringing a strong presence to the continental United States. Using his fluency in English this move enabled him to engage the heterodox Americans and their press about Orthodox Christianity. This importance of this move was eventually to be seen in the next decade as emigration from central Europe to the United States increased.

Stephen Mitropolsky was born in Kaluga on September 27, 1836. He came to the United States in 1870 with his brother, (the future) Rev. Nicholas Egorevich Mitropolsky and was an uncle of the Archpriest Nicholas N Mitropolsky. His father was a sexton. His early education included attendance at the Kaluga Seminary, followed by attending the Moscow Theological Academy from which he graduated in 1862. While a student at the academy he was tonsured a monk on August 29, 1861, with the name of John. After his ordination as a deacon, John was ordained a priest on June 21, 1862. The following September Hieromonk John received his Master's degree and was awarded a fellowship at the Academy initially in church archaeology and then in general church history.

On October 27, 1868, he was raised to the rank of archimandrite, followed by his consecration as bishop of the Aleutian Islands and Alaska. This was a new episcopal title that indicated that the Alaskan bishop was no longer an auxiliary to a diocesan bishop but rather a ruling bishop with his own diocese.

Early in his stay in America Bp. John sensed that his missionary efforts would be enhanced if the diocesan see were located in San Francisco rather than remaining in Sitka, a "request undoubtedly based upon the fact that most Russians had left Alaska" (FitzGerald, 22). He initiated a request to the Holy Synod of the Church of Russia to make the move, and in 1872 he received approval to move the diocesan administration, mission school, and episcopal see from Sitka to San Francisco. This move began a twenty-eight year period in which the seat of the diocese was outside its defined territory (Alaska), which FitzGerald identifies as the first signal of the eventual canonical irregularities which would plague American Orthodoxy in years to come (ibid.). With the movement of the see to San Francisco, Bp. John initiated the construction of the St. Alexander Nevsky Cathedral on Pierce Street.

Having studied church history in his academy days, Bp. John had developed a concept for his missionary work in North America that would convey the truths of Orthodox Christianity to the heterodox in North America. With his fluency in the English language he used a scholarly approach to argue the truths of Orthodoxy and to defend them. He was able to debate the heterodox in the press, and his accomplishments are recorded in his History of Sects in America.

Bp. John's stay in the United States ended when he was appointed on April 12, 1877, to the staff of the office of the Holy Synod in Moscow where he served for a little over twelve years. Then, on August 12, 1889 he was appointed Bishop of Aksaisk, an auxiliary of the bishop of the Don diocese. On April 9, 1910, Bp. John retired from active service as a bishop and became head of the Protection Monastery in Astrakhan until November 8, 1913. From that time he fully retired and then died on May 2, 1914.

Bp. John's service in the Alaskan mission brought two significant advances in the progress of Orthodox Christianity into North America. First was the establishment of the mission as a full diocese, not dependent upon a foreign diocesan administration. Second was the movement of the headquarters of the diocese to the mainland of the United States, closer to the center of American life.