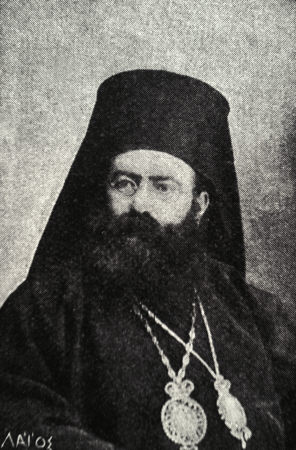 Gregory was born in Manisa (Magnesia), Ottoman Empire in 1864. His secular name was Anastasios Antoniadis or Saatsoglou.[2]

He was a brilliant student and successfully completed his studies in 1889 by submitting his dissertation titled "The Holy Evangelists never disagreed over the Lord’s last Passover (Easter)". In the last year of his studies, according to the old custom, he became a priest, becoming first ordained a deacon and changing his name to Gregorios.[2]

After his graduation he served in various dioceses including Thessaloniki, Serres and Drama. Initially he served as a deacon and instructor of religion, and later as Archimandrite, Protosyngellos and Preacher.[2] He was among the first preachers who included the Demotic language in his preachings.[1]

On October 12, 1902 he was appointed Metropolitan Bishop of the important Metropolis of Strumica, in the region of Macedonia. Here he faced struggles not only against the Turks, but especially against the Bulgarian Revolutionary Committee, whose members tried several times to assassinate him in 1905.[1][note 2]

Metropolitan Gregory remained in office until 1908, when the Ecumenical Patriarchate, following pressure by the Ottoman government, was compelled to transfer him on July 22, 1908, to the newly established Diocese of Cydoniae, in modern Ayvalik, Turkey, on the western coast of Anatolia.[2]

During his first years in office in Cydoniae he supported the expansion of educational and charity institutions in the region. However the period in which Metropolitan Gregory shepherded the Diocese was one of the most turbulent in the history of the Ottoman Empire, affecting extensively the political life of there.[2]

Several "patriotic" manifestations of the Greek Orthodox were considered a threat to the stability of Ottoman power, and so martial law was implemented in the city from July–August 1909. Many Greek Orthodox inhabitants were persecuted and sent to prison in that period. Metropolitan Gregory tried to intervene with the Ottoman authorities on their behalf. However many of them continued to be imprisoned in the Halicarnassus prison, even though martial law was raised after one month. As a result of his protests to the Ottoman authorities, he still managed to have several prisoners released.[2]

While World War I was ongoing, he was accused of high treason and was tried twice at a military tribunal in Smyrna. Although the accusations against Metropolitan Gregory were not proven, he was convicted and imprisoned in 1917. After the capitulation of the Ottoman Empire, he was released on October 16, 1918 and returned to Cydoniae.[2]

Initiatives during the Greco-Turkish War

In May 1919 the Greek Army occupied the region after approval by the Great Powers, and Cydoniae became part of the Smyrna Occupation Zone. Metropolitan Gregory remained in Cydoniae, although many times he came into conflict with the Greek High Commissioner in Smyrna Aristeidis Stergiadis.[1]

Due to the developments of the Greco-Turkish War, the Greek civil and military authorities had to retreat from the area in August 1922. Before the advancing Turkish Army reached Cydoniae, Gregory convened the local council of elders ( 'dimogerontia' ) and proposed the immediate evacuation of all civilians from the area, in order to avoid being massacred. However his recommendations were not accepted.[1]

Thus the plight of the Greek residents of Cydoniae started in August 1922, when the first irregular bands of the Turkish army entered the city. Martial law was declared and during the following days all adult males were arrested and sent to labor battalions in the interior of Anatolia, where most of them died. On the road leading to the village of Freneli (Aureliopolis in Asia), 4,000 of them were shot down with machine guns. Under these circumstances, Gregory tried to save the surviving Christians, women, elderly and children, by intervening with the Turkish authorities, which did not hesitate to humiliate him.[1][2][4][note 3]

After 6,000 of the inhabitants of Moschonesia were also massacred, including Metropolitan Ambrosios, Metropolitan Gregory was instrumental in arranging permission from the American Red Cross to secure ships from Lesbos in order to carry the women and children to safety. The Turkish authorities agreed to this proposition. As a result, the largest part of the Greek Orthodox population of the city – 20,000 out of 35,000 – were saved by Greek ships sailing under the American flag.[1][2][3]

Although he encouraged all the priests of the city to leave, Metropolitan Gregory stayed back. At the last moment, on September 30, 1922, while all the priests were gathered on the waterfront ready to depart, they were arrested by the Turkish authorities, along with the metropolitan, and were taken to the prison beside the city hospital, where they suffered horrible tortures.[1][2]

On October 3, 1922, they were taken outside the town and executed.[3][4] According to witnesses Metropolitan Gregory died of a heart attack, when the Turkish troops attempted to bury him alive.[5]

Ten years later in 1932, on the initiative of the Metropolitan of Mytilene, Iakovos of Dyrrachion, Metropolitan Gregory’s statue was put up in Mytilene, where members of his congregation had escaped. The inscription on the statue read: