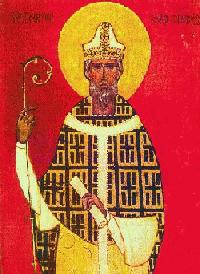 Our father among the saints Germanus of Paris, also Germain of Paris, was the Bishop of Paris from 536 to 576. He courageously sought, largely unsuccessfully, to end the civil strife and restrain the viciousness of the Frankish kings. He founded a monastery at Paris now known as Saint Germain-des-Pres. He is commemorated on May 28.

St. Germanus was born, c. 496, near Augustodunum, Gaul, present day Autun, in Saone-et-Loire. His parents were Eleutherius and Eusebia. He was educated under the care of his cousin Scapilion, a priest, in Avalon and Luzy. He was diligent in his religious life and attended Matins at midnight regardless of the weather. In 530, he was ordained a priest at the age of 34 by Agrippinus the bishop of Autun and was appointed abbot of the Monastery of St. Symphorien near Autun. Fr. Germanus lived a life of hard work and austerity and was generous in his almsgiving.

In 554, Germanus was in Paris when Eusebius the bishop of Paris died. The Frankish King Childebert, with the unanimous support of the clergy and people, nominated Fr. Germanus successor to Bp. Eusebius as Bishop of Paris. After his consecration Bp. Germanus continued his austere and prayerful life style and greatly influenced Childebert, who had been living a sinful life, to reform.

Bp. Germanus took part in a number of councils in France. He attended the Third and Fourth Councils of Paris in 557 and 573. He also participated in the Second Council of Tours in 566.

During 542, King Childebert had besiege the city of Saragossa in Spain. After the inhabitants of the city placed themselves under his protection and carried in procession the relics of St. Vincent, a martyred deacon, Childebert was moved by their devotion. After speaking with the bishop of the city, he lifted the siege in return for the blood stained stole that had belonged to the saint. After returning to Paris the king built in the Celles suburbs of Paris a church in honor of St. Vincent and the Holy Cross that is now known as St. Germain des Prés (of the fields). Later, when Childebert fell ill at his palace at Celles, near Melun, with an illness for which his physicians were not able to find a cure, Bp. Germanus paid the king a visit. The bishop spent the night praying with the king for his recovery. The next morning Bp. Germanus laid his hand on Childebert, who suddenly found himself completely healed. In gratitude to God for the miracle, Childebert gave to the church of Paris the lands of Celles.

The king had chosen the Church of St. Vincent as the place of his burial. On December 23, 558, Bp. Germanus and six other bishops performed the ceremony of the dedication of the church that became the royal burial place for the French kings. On that day, King Childebert died.

After the death of King Childebert, Bp. Germanus became enmeshed in the civil strife caused by rivalry among the kings' nephews who had divided the realm of Childebert into four parts. In this he was not successful although he ended up excommunicating Charibert I in 568 for personal wickedness.

Bp. Germanus reposed on May 28, 576, having been unable to establish peace among the warring brothers and their wives. His body was interred in St. Symphorien's chapel in the vestibule of St. Vincent's Church. In 754, his relics were translated to the body of the church in the presence of Pepin and his seven year old son Charlemagne, to be. From that time the church became known as St. Germain-des-Pres.

Among the works of St. Germanus is his "An Exposition of the Liturgy", a genuine Gallican liturgy that was used in France before the Roman rite was introduced in the time of Charlemagne and Pope Adrian I. A pastoral reconstruction of the rite was made in the mid-20th century by Evgraf Kovalevsky (later Jean-Nectaire (Kovalevsky) of Saint-Denis) and is known as Divine Liturgy according to St. Germanus of Paris.

Holy Germanus, as bishop of Paris you remained the monk you always were, cherishing the beauty of the Liturgy and developing the cult of the saints. Your miracles merited your veneration by young and old alike. It was thus that you exercised a happy influence over the powerful, and prevailed on them to free slaves and release prisoners. And in the name of Christ, in the Church of Gaul you made to reign concord and peace.

Let us celebrate the father of the poor, the treasure of the needy, the master of wisdom of kings and powerful men, the unifier of the Church of Gaul, the unmercenary healer of all illnesses: St Germanus, the founder of the abbey that still bears his name, the crafter of peace, the exemplary pastor of Paris: for he intercedes for our souls before Christ our God.