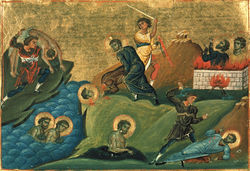 The early life of Anthimus is unknown. He was the bishop of Nicomedia at a time in which it had large Christian population. The city was also the chief residence of emperor Diocletian. The persecutions re-instituted by Diocletian became particularly intense in Nicomedia after a fire at the imperial court. The pagans accused the Christians of setting the fire and reacted against them with terrible ferocity throughout the communities of Bithynia.

Massacres transpired in the Christian communities after pagan altars were set up in the marketplaces, in which no transactions were permitted until a sacrifice to the gods and the spirit of the Augustus had been made. Bishop Anthimus hid himself in the village of Omana not far from Nicomedia at the request of his flock. From there he sent letters to the Christians, urging them to keep firmly the holy Faith and not to fear tortures.

One of his letters, that was sent with Deacon Theophilus, was intercepted and turned over to emperor Maximian. Dn. Theophilus was cruelly questioned and died under torture, without revealing the whereabouts of Bishop Anthimus to his torturers. Maximian soon managed to learn whereabouts of Bp. Anthimus. A detachment of soldiers was sent after him. Bp. Anthimus met them along the way, but the soldiers did not recognize him. The bishop invited them to join him for a repast that he provided. After the meal, Bp. Anthimus revealed that he was the one they sought. The surprised soldiers did not know what to do. They were ready to leave him and lie to the emperor that they had not found him. However, Bp. Anthimus was not one to tolerate a lie. So, he would not consent to their plan.

The soldiers came to believe in Christ and received holy Baptism. The bishop ordered them to carry out the emperor's instructions. After Bp. Anthimus was brought before the emperor, Maximian ordered that the instruments of execution be brought out and placed before him. "Do you think, emperor, to frighten me with these tools of execution?" asked Anthimus. "No indeed, you cannot frighten one who wishes to die for Christ! Execution is frightening only for the cowardly, for whom the present life is most precious." The emperor then directed that Bp. Anthimus be fiercely tortured and beheaded by the sword. Bp. Anthimus joyfully glorified God with his last breath and received the crown of martyrdom.

The date of St. Anthimus' martyrdom is uncertain. Traditionally, it is placed under Diocletion, in 303 (following Eusebius of Caesarea), when "rivers of blood" flowed.

A fragmentary letter preserved in the Chronicon Paschale, written in prison by the Priest Lucian of Antioch, who was awaiting death, mentions Anthimus, bishop of Nicomedia, as having just suffered martyrdom. Schaff and Wace note that Lucian was imprisoned and put to death during the persecution of emperor Maximinus Daia, in 311 or 312, and therefore conclude that, if the fragment is genuine, Anthimus suffered martyrdom not under Diocletian but under Maximinus.