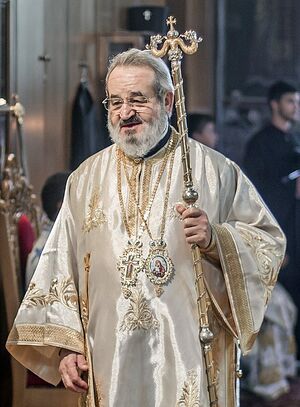 His Eminence Theophylaktos of Tripoli

His Eminence, the Most Reverend Theophylaktos (Tzoumerkas) of Tripoli is the current exiled Archbishop of Tripoli and Exarch of All Lybia, part of the Church of Alexandria.

Konstantinos Tzoumerkas was born in 1945 in Exochi in Pieria, Greece where he completed his basic education. After finishing school he entered the Holy Monastery of Vatopedi on Mount Athos while still young in age. At the monastery he took monastic vows and was tonsured a monk. While at the monastery he was the chief secretary and librarian for the monastery. He continued to pursue his education at the Athonite Ecclesiastical School. He studied at the School of Theology of the University of Athens from which he holds a degree.

In 1991, Archimandrite Theophylaktos was transferred from the Patriarchate of Constantinople to the Patriarchate of Alexandria, and attached to the Archdiocese of Carthage in Tunisia under Archbishop Irenaeus (Talambekos) (1990–1994), later Archbishop of Pelusium (1997–2004). There he served as vicar of the Cathedral of Saint George in Tripoli, Lybia as well as served as head of the high school. He established the Hellenic Center of Greek Languages in Tripoli that served the children of mixed marriages, as well as Libyans who wanted to learn the Greek language.

On November 26, 1999, Archimandrite Theophylaktos was elected titular Bishop of Babylon by the Holy Synod and consecrated on November 26, 1999 by Patriarch Petros VII of Alexandria (1997–2004). His residence was the Patriarchal Monastery of Saint George in Old Cairo, of which His Grace was rector.

On October 27, 2004, His Grace was elected by the Holy Synod Archbishop of the restored Archdiocese of Tripoli and consecrated by His Beatitude the newly-enthroned Patriarch Theodoros II. In 2009 the Serbian diaspora in Libya awarded His Eminence with the Order of Saint Savas.

During the Arab Spring in 2011 the First Libyan Civil War broke out. After the invasion of Benghazi by NATO and al-Qaeda on February 2011, its only remaining church besides the cathedral was looted and its clergy and faithful expelled to Tripoli. Lastly, the cathedral was sacked after Easter.

“As the revolution spread and all control was lost, our fears grew. The embassies closed and the diplomats left, as did the foreign companies with the employees, and I was left alone with the president of the Greek community. Conditions were terribly difficult. We went to church in terror. We celebrated Easter 2011 at noon, fearing gangs and Islamists at night. One day they entered the temple, snatched everything. From icons, gospels, church utensils to the miter and my vestments. I was on the phone from morning till night talking to the media about the fate of Christians, now they have forgotten us, no one cares.” — H.E. Theophylaktos

In such a situation, the Greek Ministry of Foreign Affairs asked His Eminence in August 2011 to leave Libya, leaving at the mercy of the Islamists the Christian presence, which has its roots in the Roman Empire. Archbishop Theophylaktos, despite the bombing of Tripoli by NATO, refused to leave the capital, saying that he must remain with what's left of his flock in the country to care for their spiritual needs.

Archbishop Theophylaktos' courageous act aroused admiration throughout the Greek world, and Patriarch Theodore II even compared him to the Greek national war hero of the early 20th century, Saint Chrysostomos of Smyrna, who refused to leave Smyrna after the surrender of the city to the Muslims and was killed along with most of the remaining Greeks.

In 2013, His Eminence was expelled from Libya by the revolutionaries. He took refuge in Greece, while the keys of the sacked cathedral were kept with a Greek woman in Libya. Up to this day Archbishop Theophylaktos is exiled from Libya, hoping that one day he will be allowed to return and start again his archdiocese.

Despite living in exile, the archbishop is still part of the Holy Synod of Alexandria, and attended the Council of Cyprus in 2016. He currently lives and serves at the Metropolis of Kitros, where his hometown is located.

On April 3, 2021, at the vespers of the Sunday of the Holy Cross, His Beatitude Theodoros II announced that Archbishop Theophylaktos would soon be able to return to his see and reopen the churches in a safer Tripoli and Benghazi. Three days later, the Prime Minister of Greece visited Libya, confirming the end of His Eminence's exile.