Sylvester I of Rome 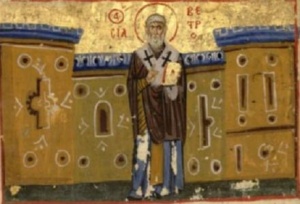 Sylvester I, Pope of Rome.

Our father among the saints Sylvester I was Bishop of Rome from January 31, 314 to December 31, 335. He headed the Church of Rome during the first two decades following the Edict of Milan. He is commemorated on January 2.

Little is known of the early life of Sylvester. He was born in Rome to Rufinus and Justa. The date of his birth is unknown. His father died while Sylvester was young. Raised by his mother, he received his education from the priest Quirinus who gave him a Christian education. As a young adult, Sylvester strove to fulfill the Lord's command to love one's neighbor. He welcomed strangers and travelers into his home and did not hesitate to provide shelter for more than a year to the confessor Bishop Timothy of Antioch.

Bp. Timothy preached actively, bringing many to Christianity. His activities came to the attention of the Roman Prefect Tarquinius who had Timothy arrested and then executed. Sylvester secretly took his body and buried it. When Tarquinius found out, he had Sylvester arrested, tried, and placed in prison. In prison Sylvester remained true to his confession of faith although threatened by torture and death by Tarquinius. Sylvester was soon freed when after the trial Tarquinius suddenly died. Sylvester then returned to preaching the Gospel to the pagans, converting many of them.

At the age of thirty years, Sylvester was ordained a deacon and then a priest by Bishop Marcellinus. On January 31, 314, Sylvester was elected Bishop of Rome after the death of Bp. Militiades. Sylvester was known for insisting that his priests strictly fulfill their duties and not become involved in secular affairs.

Sylvester led the Church of Rome during the early decades following the Edict of Milan in 313 that proclaimed religious toleration in the Roman Empire. He was a staunch defender of Christianity. He led a public debate with other religions, particularly with Jewish advocates, to determine which faith was true. His efforts bore success, bringing many to believe in Christ, who then asked for baptism.

During the sessions of the First Ecumenical Council of 325 in Nicea, Bp. Sylvester did not attend but was represented by two presbyters, Vitus and Vincentius. [1] [2] [3] [4]

Bp. Sylvester reposed peacefully of old age on December 30, 335 and was buried in the cemetery of St. Priscilla.

During the latter part of the fourth century, members of the Western Church, who thought it inappropriate that Constantine I could be baptized on his death bed by a bishop whose orthodoxy was in question, built a legend that earlier in Constantine's career Bp. Sylvester had baptized Constantine after curing him of leprosy. This legend was later documented in the "Donation of Constantine"wikipedia: Donation_of_Constantine, a document fabricated in the second half of the eight century.