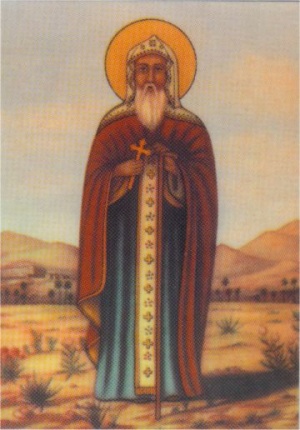 Coptic icon of St. Shenouda the Archimandrite
Saint Abba Shenouda (Shenoute) the Archimandrite (348-466 A.D.) was the abbot of the White Monastery of Atribe in the desert of Thebes, Egypt, for more than 65 years. He ruled over 2200 monks and 1800 nuns. He is called Archimandrite (the head of anchorites) because he used to practice the hermetic (isolated) life from time to time, and he also used to encourage some of his monks to withdraw to the desert after a few years of coenobetic life (living together in monastic community). In 431 A.D. he accompanied Pope St. Cyril the Great of Alexandria to the Ecumenical Council of Ephesus.

He created Egyptian nationalism or Coptism, getting rid of every Hellenistic (pagan) culture from the Coptic literature. Besides his deep spirituality, he was a political and a social reformer. Quoting [1], "Any cursory study of the living conditions of the peasants in Upper Egypt at his time, reveals a sub-human living conditions. This was exemplified in their illiteracy and slavery to the Greek landlords and to the land they cultivated. Such slavery was a life sentence that only death could free them from it. Even after Christianity spread among them, their spirits were always dampened by the pagan landlords, who became more and more ferocious, especially after their slaves rejected their religion and adopted another (i.e. Christianity). The lack of leaders to defend them from such grave injustices, did not help either. This set the stage for the emergence of St. Shenouda as a leader of the oppressed populace."

Shenouda was born of good Christian parents in a village near Akhmim in Upper Egypt. His father owned a cattle farm. Like David (in the Old Testament), his father used to send him to tend the sheep while he was yet a little boy. When Shenouda reached ten years old, he was put under the guidance of Abba Pijol (Pigol or Pegol), his maternal uncle and abbot of the Red Monastery.

As a youth, Shenouda proved to be spiritually minded to a rare degree, and strove continuously after spiritual excellence. He enjoyed studying and teaching both monks and laymen. And when Abba Pijol departed to heaven, Shenouda was elected to take his place as abbot. Under his guidance, the number of monks reached four thousand; 1800 of them in the Red Monastery and the rest in the White Monastery, while a few of them preferred a solitary life.

Shenouda was greatly concerned about organizing the monastic life. He devised a system that was in fact a combination of St. Anthony's hermetic life, and St. Pachomius coenobetic monasticism. He used to retreat to a remote cell and spend sometime in seclusion, then return to the monastery and participate in the monastic community.

Shenouda built a house outside the walls of the monastery for those who were waiting to be ordained monks. He appointed a chief to the monasteries (also called the archimandrite). He assigned specific periods for individual and group prayers. The doors of his monastery were opened to the villagers every Saturday evening. Thousands participated in the Vespers prayers, spent the night in the monastery, and shared in the celebration of the holy mass the next morning. After the mass, they were invited to share a meal, which the monks prepared and served. Shenouda took advantage of the presence of those people in the monastery to teach them the true faith inherited from the saintly fathers.

Abba Shenouda the Archimandrite lived in an age full of emotions and startling upheavals. It was an age in which the Ecumenical Council of Ephesus was convened, followed by the council of Chalcedon which started the rift between the churches. This same age witnessed the passing away of paganism from Egypt, after the desperate effort of Julian the Apostate to revive it. Finally, it was an age in which Egyptian nationalism reassured itself against all imperial forces. In the midst of this uprising, Shenouda towered like a beacon of light. He loved solitude, yet he shared the life of the world to the full, and was one of the unparalleled defiants against all Hellenistic tendencies. He used his talents of speaking and writing to inflame the crowds, using the pure Sahidic Coptic dialect of Upper Egypt. To all who heard him or read his writings, his words had the power of magic.

But his magic was not the magic of words only; he went about feeding the hungry, clothing the naked, and sheltering the homeless. The schools attached to his monasteries did not serve the saints alone, but they also served those living in the vicinity as well. His doctors among the monks administered their science to all alike.

One instance of his outpouring love was evident when the Bagat Tribe attacked the region of Akhmim, capturing families and killing villagers. Hearing of this catastrophe, Shenouda crossed the Nile and went to the chief of the Bagats, saying, "Take the riches and give me the people." The chief readily accepted, and handed over to him hundreds of captives. Shenouda sheltered them in his monasteries for three months; he put the sick under the care of the doctors; the children were cared for by the educators, while the social workers looked after the aged and the infirm. All these specialists were from among his monks. During these three months, 94 of the refugees died and 52 babies were born. This instance indicates the well- organized system of the monks under the vigilant eyes of the Archimandrite.

Shenouda was not only a guide to monks, but was also in charge of 1800 nuns. To those he wrote several letters teaching, and guiding them in the right path. Fortunately, many of his writings still exist; they portray for us his clear thinking and deep spiritual insight.

St. Shenouda was also granted the gift of performing miracles in the name of our Lord Jesus Christ; some of these miracles are listed in [2].

Shenouda was blessed with an unusual long life. He lived to be 118 years old. His fatherhood over monasteries and convents lasted 66 years. During his long life, Shenouda watched his people closely. His sympathy for them was boundless. Consequently, he became their spokesman and their defendant; and because he identified himself with them, he represented their national aspirations and led them to the realization of their higher selves. For those reasons, he is considered the liberator of Egyptian (Coptic) thought from the (political and pagan) shackles of Byzantium, and the truest representative of the Pharaonic (Ancient Egyptian) genius.

The White Monastery with which Shenouda is identified is unique among the Christian structures; it is more like a Pharaonic temple than a Christian sanctuary. It stands on the edge of the desert, west of Sohag (Upper Egypt), near the ancient town of Atribe. Historians think that it was built in the lifetime of Shenouda. The only remaining part of it is the church joined by the house of the priest. The monastery of St. Shenouda in Sohag was revived by the Coptic Orthodox Church in the late 1990s, and Coptic monks are now living there.

As for the Red Monastery [3], which gets its name from the red bricks of which it is built, nothing remains of it, except the church also. This monastery is called by the name of Abba Pishoi (Bishoy), a saintly monk of that era.

Shenouda became sick in his last years. His disciples took him to a hermit called Abba Thomas. At the end of their meeting, Thomas said, "I would like to inform you, Father, that I will depart to heaven shortly. You will know that this happened when you see the big stone in front of your cell split in two. I beg you to come and pray on my body before you bury it."

After st. Thomas passed away, Abba Shenouda became very sick, and he called his disciples to his cell. After he blessed them, he commended his soul in the hands of his Savior on July 14, 466 A.D. (Abib 7 - Coptic month/Coptic calendar). He left a great wealth of literature; some of which are preserved in the museums of Naples and London. His biography was written by his faithful disciple Wissa (Besa).