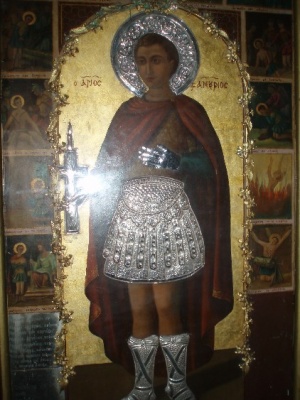 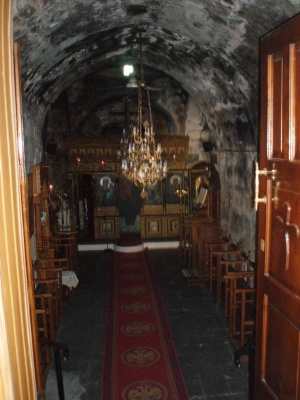 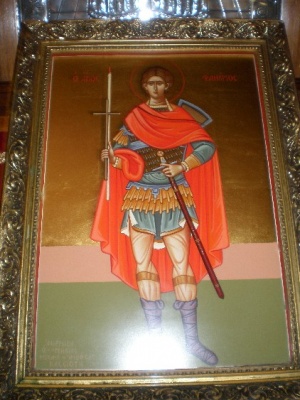 The holy, glorious and right-victorious Great-martyr Phanourios (also Fanurius, Fanourios, Phanurius, Phanourius) the Newly Appeared of Rhodes, the Miracle-Worker, is commemorated by the Church on August 27. There is no literature available in the church prior to discovering his little church in Rhodes so not much is known about St. Phanourios's life other than the images of his martyrdom on his icon.

The only literary evidence that supports a historical date, relating to this saint, is documented in the book Lives of the Saints, which testifies that the icon in Rhodes was discovered, around 1500 AD. Some sources support the opinion that the icon was discovered in Cyprus and not in Rhodes. A 2008 research paper on folklore[1] suggests that there are two manuscripts. The first is the mention of a miracle included in the Cod. Vat. Gr. 1190 (dating from 1452 and written in Crete) and was published in the Acta Sanctorum. The second manuscript originates from Heraklion, dating from 1600-1640 (Vassilakes-Mavrakakes 1980-81, p. 226). Both of these manuscripts describe a miracle that took place in Rhodes which caused the saint's fame to spread from Rhodes to Crete.

In the Church we have the tradition of patron saints. St. Phanourios has become famous for assisting the faithful in revealing lost or hidden spiritual matters of the heart, objects, directing or revealing actions that should be taken, restoring health and similar situations. He is then honoured by the faithful through a symbolic cake, called the "Phanouropita" which can be brought to the church, at any time, for a blessing.

Discovery of the icon

The main way of familiarising oneself with the life of the saint is through the discovery of his icon in Rhodes (or Cyprus).

A fortuitous discovery by nomadic pagans, not Christians, brought to light this unheralded saint when a roving band of Arabs, who had pillaged the island of Rhodes uncovered amid the ruins of an ancient church a group of icons, among other artifacts. All of the icons were in a state of decay or near ruin with the exception of one, which appeared as new and as fresh as though it had been painted the day before. This icon was discarded by the Arabs, ;who failed to attach any importance to it. At a safe distance a group of monks hiding in the rubble observed this phenomenon and waited patiently until the Arabs had left the scene, whereupon they rushed to reclaim this fantastic image in its remarkable state of preservation.

They beheld a clearly outlined face of a saint with the name inscribed in what appeared to be fresh lettering that spelled out "Fanourios" and on closer examination fell on their knees at what they saw. Drawn about the saint were twelve distinct frames in each of which Fanourios was shown enduring a cruel form of torture in a realism that suggested the artist must have been witness to the atrocity. They rushed back to see if any of the other icons were in as perfect a state, but although they were all of the same basic design, size, and shape, all of them were quite ancient and quite indistinct. After careful scrutiny it was finally concluded that this icon of fanou4rios had, indeed , been one of a group that had been exhumed after untold centuries and that its freshness was a divine manifestation of the complete saintliness of this man about whom they were now determined to learn more.

But years of research, scanning the archives of centuries and questioning the leading authorities of the day, yielded nothing, and no more was known about Fanourios than the day on which his icon was snatched from the ruins of that ancient Greek church. The torture scenes of the icon provided no clues, and examination of which showed Fanourios being stoned, on the rack, being slashed, behind bars, standing before a judge, tied to a frame, being =burned with candles, tied to a post, thrown to wild animals, crushed by a boulder, holding hot coals, and a demon hovering against a background of flames. All of these horrors conveyed that Fanourios was an apparently indestructible instrument of God and that in itself was sufficient evidenced of his sainthood.

Archbishop Milos of Rhodes concluded that the unblemished icon itself was testimony enough to prove that Fanourios was a man of divine grace, and he petitioned the Patriarch to convene a synod which would officially proclaim Fanourios a saint, after which there was erected in the saint's memory a cathedral which enshrined the holy icon. Fanourios, lost for centuries in the ruins of a church, became the patron saint of things lost. To this day his name is invoked when prayers are asked for the recovery of things lost items." [1]

The original icon is quite large. In the center is a portrait of the saint holding a candle in his right hand and around this are 12 smaller images showing the each stage of his martyrdom.

The portrayal of each illustration is as follows:

The custom of the Phanouropita ("Phanourios" and "pita" for "bread" or "cake") is a Greek and Cypriot tradition, preserved in many regions of Greece and Cyprus and spread to the Greek people of the diaspora. Though it is not a Holy Tradition, it has been welcomed and adopted formerly into the church as a blessing service, that take no more than 5 minutes to complete.

It is offered at Vespers services and/or just before the Liturgy finishes on the feast day of the saint (August 27). Many villagers in Greece believe that they follow this tradition to grant rest to the soul of the saint's mother. The Church does not formally hold this position since there is no evidence from what we know of the saint's life to confirm whether his mother indeed was a fornicator, as this 'hearsay' suggests. Despite the Church having made this statement on many occasions, the common people within the Church will still express the phrase, "May God grant rest to the soul of Saint Phanourios' mother."

The pita is small and round, like a cake, and should be made using either nine or eleven ingredients. The basic ingredients include sifted flour, sugar, cinnamon and oil.

A heavenly song of praise is brightly sung on the earth;
the hosts of the Angels keep an earthly festival now in splendour and radiant joy;
from on high, they praise with hymns thy suff'rings and struggles;
and below, the Church doth laud the heavenly glory
thou foundest by thy contests and pains, O glorious Phanurius.

From a vile captivity,
thou didst deliver the Lord's priests,
and, O godly-minded one,
didst break their bonds by divine might;
thou didst bravely shame the tyrants'
audacious madness,
giving joy unto the Angels, O thou Great Martyr.
O Phanurius most glorious,
we all revere thee
as a true warrior of God.

This abandoned 14th-15th century monastery stands in the village of Vorizia, 52 kilometres south-west of Heraklion and had a church dedicated to Agios Phanourios, housing some incredible 15th century frescoes which are pure artistic masterpiece and unique examples of the Cretan School.
The two aisles of the church were constructed and painted at different times: the northern aisle is the oldest with dates inscribed in the wall of 1332 and 1404, the southern one is next with an inscription dated 1400-1428.
The church is a very rare example of a church with two narthex at the entrance of the church, both at right angles to the two aisles of the church. The church contains interesting exterior decorations of bricks. The doors and round windows are exceptionally well-carved. It is one of the best examples of Gothic influence in the exterior decoration of Byzantine churches in Crete; also the church contains some very well-preserved frescoes.