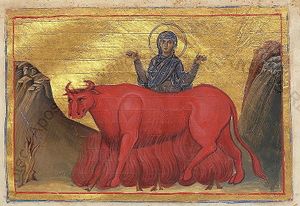 Miniature from the "Menologion" of Basil II (985 AC)

The holy and glorious Virgin-Martyr Saint Pelagia of Tarsus was a resident of the city of Tarsus [1] in Asia Minor during the reign of the Emperor Diocletian (284-305). She is commemorated May 4.

According to the tradition of the Church, the son of Diocletian fell in love with the holy maiden, wishing to seek her as his own. When he made advances towards her, Pelagia replied that she could not love him, having sworn herself to Christ, the Bridegroom. In passion, anger, and sorrow, Diocletian's son killed himself. Pelagia was then sent to Rome by her pagan mother, where Diocletian himself asked her to become his wife. She refused, and seeing the cruelty of the tyrannical emperor, she called him insane. The emperor had her burned at the stake, and as her flesh melted like wax, the incense of myrrh emitted from her holy flesh, perfuming the city.

The pagans sent four lions to surround her bones, but instead of consuming them, they protected her remains from vultures until Bishop Linus recovered them. After the legalization of Christianity, Constantine the Great built a church on the site of those remains in her honor.