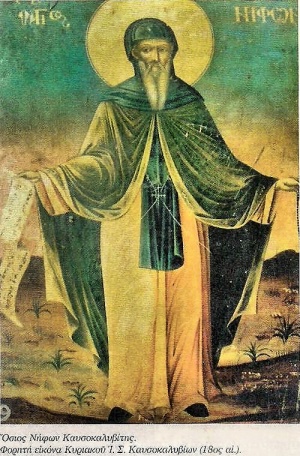 A Byzantine Greek, Niphon was born in the village of Lukovë, in the Himarra region of the Despotate of Epirus in 1315 AD. His father was a revered priest. From an early age he studied the Holy Scriptures and the Lives of the Saints, and became an erudite polymath.[1]

Because he thirsted to learn about the monastic life, he went to the monastery of Geromerion (near the town of Filiates) where he entered into obedience under an ascetic Elder from Sinai. There he learned the canons of becoming a Hesychast, and the way of noetic prayer.[1]

Soon after he moved to the nearby monastery of Mesopotamos (in modern Mesopotamos, Delvinë District district) where he was tonsured a monk, and was ordained to the priesthood at the age of twenty.[1][2]

After the repose of his Elder, Niphon went to the monastic state of Mount Athos sometime after 1335,[3] where he dedicated himself to greater asceticism, under the guidance of the monastic Elders, Neilos Erichiotes, Theognostos and Maximos Kavsokalybites ("the Hut-burner," January 13),[1][4] settling in the cave of the venerable saint Peter the Athonite, close to the Great Lavra (Athos).[1] Niphon was the author of the first biography of Maximos Kavsokalybites, his spiritual advisor.[5]

In 1345, Niphon was the Protos of Mount Athos. At that time Athos came under the protection of the Serbian Tsar Stefan Dusan, who accused him for heresy and Bogomilism, but he was successfully defended by Gregory Palamas.[6]

In 1347-8 Niphon was tried and deposed from his position as protos after being accused by fellow monks of heresy.[7] He was succeeded by the Serbian monk Antonios. His deposition is regarded as either part of the struggles between rival religious factions that predated the Serbian control of the Athonite community or attempts of Stefan Dusan to gain control of Athos by appointing a Serbian official as its head.[6][7] This intervention resulted in serious contradictions between the Greek dignitaries and the Serbs of Chilandari monastery on Athos.[8]

During 1355-63 he was again accused of heresy when his servant Bardarius revealed before dying that he had joined the Euchite movement, but he was defended by Patriarch Callistus I of Constantinople. It is considered unclear from contemporary accounts whether Niphon was a Euchite or Hesychast at that time.[9]

Niphon lived the rest of his life as a Hesychast, dying peacefully at the age of 96 in 1411 AD, glorified by gifts of wonderworking and clairvoyance.[1][10]

A service to St. Niphon exists in the hermitage of Kavsokalybion, where the cave of his asceticism can be located, as well as a small chapel in his honour.[11]

Niphon, the God-bearer, is declared one of the Saints of Athos,
who lived the life of winged creatures in the confines of the Lavra,
and received from God the gift of prophecy.[note 1]