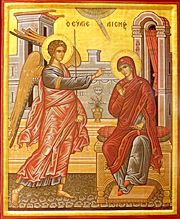 Kyriopascha ("The Lord's Pascha") is the rare concurrence of the Great Feast of the Annunciation (March 25) with Pascha. It is an especially festive event, including complex rubrics for its liturgical celebration.

The elimination of Kyriopascha from the cycle of the Revised Julian Calendar is one of the criticisms leveled against those who use that reckoning.