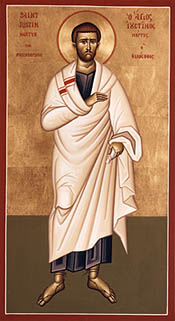 The holy, glorious, right-victorious martyr Justin the Philosopher (also Justin Martyr) was one of the earliest apologists for the Christian faith. A convert to Christianity, he produced a number of works during the middle of the second century, amongst them two Apologies addressed to the Roman emperors, defending and explaining Christianity as the true philosophy. The power of his arguments was to earn him his martyrdom. His feast day is celebrated on June 1.

The dates of Justin Martyr's birth and death are not known. He is believed to have been born between 100 and 114 A.D., and his death is believed to have occurred between 162 and 168. Most of what is known of his life comes from his own writings. He was born in Palestine in Flavia Neapolis, known in Old Testament times as Shechem, but now as Nablus. He called himself a Samaritan, although his father, Priscos, and grandfather, Baccheios, may have been Greek or Roman. As a child he was raised a pagan in a family of means and studied philosophy at various schools, including those in Alexandria and Ephesus. He appears to have traveled extensively and eventually settled in Rome.

In his studies he initially leaned toward Stoicism, then toward Pythagoreanism and Platonism before becoming interested in Christianity while in Ephesus. There he recounts his conversion as a semi-mystical experience: while walking along the seashore, there appeared an old man alongside him. He was impressed by this Christian, who explained that Jesus was the fulfillment of the promises made through the Jewish prophets and thus the only true philosophy. He had also been impressed by the steadfastness of the Christian martyrs. His soul inflamed with a love of the prophets and those who were friends of Christ, Justin became a Christian about 130. As a philosophy student he approached Christianity as bringing completeness to the pagan philosophies. As a Christian, he devoted much of his energy to the missionary work of evangelizing the lost.

Justin's martyrdom appears to be the result of his bettering the Cynic philosopher Crescens in debates in Rome. Around 165, he was charged, possibly by Crescens, of following an illegal religion. Subsequently the prefect, Rustcus, condemned Justin to death by beheading with six of his companions: Chariton, Charito, Evelpostos, Paeon, Hierax, and Liberianos. The Acts of Justin the Martyr is believed to be a record of this trial.

Justin was a prolific writer. Many of his writings now are known only through excerpts and quotation by other authors of antiquity. Only three of Justin's works of certain authenticity are extant: two versions of his Apology and one of his Dialogue with Trypho. The latter purports to record conversations that Justin had with a Jewish rabbi named Tryphon, who may have been the rabbi Tarphon mentioned often in the Talmud, in verbal attempts to reconcile Christian and Jewish positions. Among other works attributed to him are:

O Justin, teacher of divine knowledge,
You shone with the radiance of true philosophy.
You were wisely armed against the enemy.
Confessing the truth you contended alongside the martyrs,
With them, ever entreat Christ our God to save our souls!

The whole Church of God is adorned with the wisdom of your divine words, O Justin;
The world is enlightened by the radiance of your life.
By the shedding of your blood, you have received a crown.
As you stand before Christ with the angels, pray unceasingly for us all!