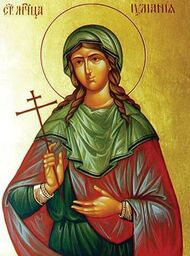 The Holy Virgin Martyr Juliana of Nicomedia was the daughter of Africanus, a famous pagan, who, after secretly accepting baptism as a Christian, refused marriage to a pagan senator. After rejecting the urging of her father and betrothed to accept marriage, she remained firm in her faith and was imprisoned, severely beaten, and then finally beheaded during the reign of Emperor Maximianus. She is remembered on December 21.

Traditionally, Juliana was born in the city of Nicomedia and as a child was betrothed to Elusius, a senator and advisor to the Roman emperor. Juliana was endowed with a profound intellect and goodness of soul. As she grew up she recognized the delusion and deception of the pagan faith and was baptized secretly. As the time for her marriage to Elusius arrived, she refused to be married. She continued to refuse to obey her father when he urged her not to break the marriage agreement and was severely beaten by her father. Continuing to disobey her father, he turned Juliana over to Elusius. Elusius pleaded with Juliana to marry him, even promising that he would not require her to abandon her Christian faith. Juliana continued to refuse and declared that she would rather be put to death.

With her steadfast refusal, Juliana was imprisoned and horribly beaten publicly before a large crowds of people. Juliana received healing and new strength from God after each beating. Finally, recognizing the futility of trying to separate the holy virgin from her heavenly Bridegroom, Elusius sentenced her to death. The holy Martyr Juliana was beheaded in the year 304.

Of the large crowds that witnessed her courage and steadfast faith during her punishment 500 men and 150 women came to confess Christ and were all beheaded, thus baptized in their own blood.