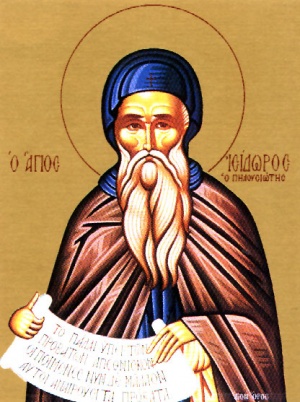 Our venerable and God-bearing Father Isidore of Pelusium was a monastic in the deserts of Egypt, making his Mount Pelusium his home and the primary locus of his ascetical efforts. He died about the year 436, and his feast day in the Church is February 4.

Isidore was Egyptian by birth and from a prominent Alexandrian family, which included Alexandrian Patriarchs Theophilus and Cyril. He studied all the secular disciplines, but as a youth withdrew from the world, renouncing his riches and earthly glory, so that he might devote himself entirely to the spiritual life. For a short time he taught rhetoric in Pelusium in Egypt; but soon his love for the things of God led him to flee to the desert as a solitary. After a year of ascetical life, he returned to Pelusium, where he was ordained to the priesthood. After a few years he retired to a monastery where he spent the rest of his life, eventually becoming abbot. From the monastery he wrote thousands of epistles full of divine grace and wisdom; of these more than two thousand still survive.

During his lifetime, he came to be a great and energetic defender of the Orthodox Christian faith, writing (according to the historian Nicephorus) more than ten thousand letters to numerous individuals, giving reproach, counsel, encouragement, comfort, and instruction.

At the time of the persecution of St. John Chrysostom, Archbishop of Constantinople, while the populace was split into two factions, one for Chrysostom and the other against, Abba Isidore sided with the golden-tongued saint. He wrote to Patriarch Theophilus that St. John was a great light of the Church, and he begged him to avoid rancor against the exiled archbishop.

In some of his many letters, St. Isidore is quoted as saying the following:

"It is more important to teach by a life of doing good than to preach in eloquent terms."

"If one desires that his virtues appear great, let him consider them small, and they will surely manifest themselves as great."

"First do and then teach, according to the example of our Lord Jesus."

"To live without speaking is better than to speak without living. For the former who lives rightly does good even by his silence, but the latter does no good even when he speaks. When words and life correspond to one another they are together the whole of divine philosophy."

O God of our Fathers,
Take not away Your mercy from us
But ever act towards us according to Your kindness,
And by the prayers of Your Saints
Guide our lives in peace.

The image of God was truly preserved in you, O Father,
For you took up the Cross and followed Christ.
By so doing doing you taught us to disregard the flesh for it passes away
But to care instead for the soul, since it is immortal.
Therefore your spirit, venerable Isidore, rejoices with the angels.

Finding you to be another morning star, O glorious One,
The Church is illumined by the brilliance of your words.
She cries out to you: "Rejoice, all-blessed and divinely-wise Isidore."