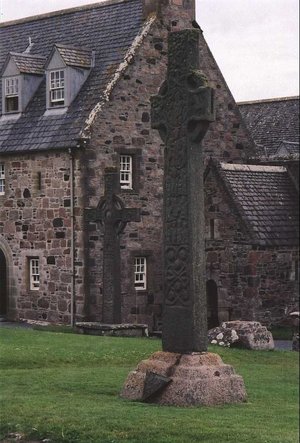 Iona, population 175, is a small island (1 mile wide, 3.5 miles long) of the Inner Hebrides, Scotland, famous for the monastery founded by St Columba of Iona and as the centre of the Christianisation of Scotland.

In 563 St Columba of Iona, exiled from his native Ireland, founded a monastery here, and from here Orthodox Christianity spread to the rest of Scotland. Numerous martyrs and other saints were produced from Iona, including not only Columba but also St Aidan of Lindisfarne and others. Many believe that the Book of Kells was produced on Iona at this time. The monastery survived until the Protestant Reformation.

Iona also became the burial site for the kings of Dál Riata and their successors.

In 1938 the Church of Scotland Minister George MacLeod founded the Iona Community, an ecumenical Christian community of men and women from different walks of life and different traditions in the Christian church that is committed to seeking new ways of living the gospel of Jesus Christ in today's world. Despite its ecumenical scope, the Community is primarily affiliated with the Church of Scotland, to whose General Assembly it reports annually. It has care of the abbey.

The community is doctrinally liberal, strongly committed to working for social justice and produces much contemporary Celtic Christian material through its Wild Goose arm. Such material, however, is sometimes at wide variance with Orthodox Christianity (e.g. in its frequent avoidance of the Trinitarian name of Father, Son and Holy Spirit, and its replacement with economic descriptions of divine action, such as 'Creator, Redeemer, Sanctifier'). This said, the community is not tied up with any form of neo-pagan Celtic religion.

Iona Abbey is of particular historical and religious interest to pilgrims, and also of note is Iona Nunnery, a site of 13th century ruins and a colourful garden. Iona is popular among visitors for its tranquility and natural beauty. It is often described by Iona community members as a 'thin' place, at which God is less hidden than in the city. Its geographical features include the Bay at the Back of the Ocean and the Hill with His Back to Ireland, said to be adjacent to the beach where St Columba landed.

Friends of Orthodoxy on Iona 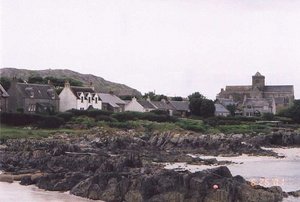 Martyrs Bay, where 68 monks were massacred by Vikings in 806 A.D.

In 1997, Friends of Orthodoxy on Iona was founded, being the 1400th anniversary of the repose of St Columba of Iona. They are an informal group of friends who go on pilgrimage together who are mainly Orthodox Christians from across the British Isles (but increasingly a growing proportion are from the USA, Canada, and European countries such as Germany, Russia and Greece).

The Friends have organised pilgrimages to Iona and other Columban sites in the British Isles such as Donegal (the birthplace of St Columba); Columban sites in Strathclyde; and to Holy Island (Lindisfarne) which had close links with Iona.

The Chairman of the Friends is Metropolitan Kallistos (Ware) of Diokleia and the friends have the blessing of many of the ruling hierarchs.