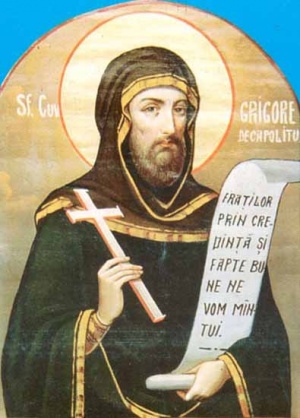 The Venerable Gregory the Decapolite is a saint of the late eighth century and early ninth century who sought an ascetic life of prayer and attained the gifts of prophecy and wonderworking. He zealously denounced the iconoclast heresy. He is commemorated on November 20.

Gregory was born in the area of Decapolis (generally today's Jordan) in the eighth century. He was devout from childhood, attended the temple of God, the services of the church, and constantly read, with reverence, the Holy Scripture. He looked to a life of asceticism. As his parents were intent that he marry, he left his home secretly and began a life of wandering the world of the Mediterranean.

His travels took him to Corinth, Rome, and Constantinople. As an ascetic, he lived for a time on Olympus. Wherever he went he preached the Word of God. During his travels, Gregory met the young monk Joseph at the Monastery of Latmos in Thessalonica. Together they traveled to Constantinople and lived near the Church of the Holy Martyrs Sergius and Bacchus. The two saints preached throughout the city and in the homes of the Orthodox believers. During the period of iconoclastic fervor they denounced iconoclasm and strove to strengthen the faith and fortitude of the Orthodox.

In 815, emperor Leo V the Armenian deposed Patriarch Nikephoros as Patriarch of Constantinople, convened a synod at Constantinople, and re-instituted the second period of iconoclasm. As Gregory renewed his fight against the iconoclasts, he was overcome with illness that undermined his strength and resulted in his repose in 816.

At first, St. Gregory's body was buried at a monastery in Constantinople. His tomb was much visited and soon many miracles occurred. Seeing this, the monks translated his relics to a shrine in the church to enable the people to venerate them more easily. After Constantinople was taken by the Ottoman Turks in 1453, a Turkish official moved his relics again, this time to a region near the Danube River. In 1498, hearing of the miracles performed through St. Gregory's relics, Barbu Craiovescu, the Ban of Wallachia, purchase them. Then, Barbu moved St. Gregory's relics to the main church of Bistritsa Monastery where they are today.

The twofold lamps of divine gifts,
Proclus, shepherd of New Rome, and Gregory, scion of Decapolis,
Guide us by the light of grace as divinely-inspired fathers.
Let us draw near and eagerly beseech them,
That we may receive forgiveness and salvation of our souls.

The Church knows you to be a brilliant sun
Enlightening all with the rays of healing and the beauty of virtue.
Therefore, as we celebrate your honored memory,
We glorify your struggles, ever-blest and all-wise father Gregory.