From OrthodoxWiki
(Redirected from Andrei Rublev)
Jump to: navigation, search

Saint Andrei Rublev (Russian: Андре́й Рублёв born in 1360?, died in January 29, 1430) is considered one of the greatest iconographers of all time. He lived in Russia and was also a monk. His feast day is July 4.

Though very few details of his life are known, tradition does give a basic outline. Andrei (commonly Andrew in English) went to a monastery, called Holy Trinity Monastery, at a young age and grew up there. He was greatly influenced by St Sergius of Radonezh, the igumen of the monastery.

Eventually Andrei decided to become a monk, and with the blessing of the new igumen of his monastery traveled to another, the Spaso-Andronikov Monastery, founded by St Andronik (June 13). There he was tonsured a monk and began to study iconography under Theophanes the Greek and a monk named Daniel.

The first known reference to his work appeared in 1405, when he is said to have written icons and frescoes in the Cathedral of the Annunciation in Moscow with Theophanes and another iconographer named Prochorus. In 1408 he and Daniel, his fellow monastic, painted frescoes in the Dormition Cathedral in Vladimir. Finally, he and Daniel were asked to paint the new church of Holy Trinity Monastery, where Andrei had grown up, after the monastery was destroyed by Tatars in 1408. This was about the time that he painted the only surviving icon credited as entirely his work - the Trinity, or Hospitality of Abraham.

Andrei Rublev reposed at Andronikov Monastery on January 29, 1430. He was one of nine saints glorified by the Church of Russia at its council held June 6-9, 1988. 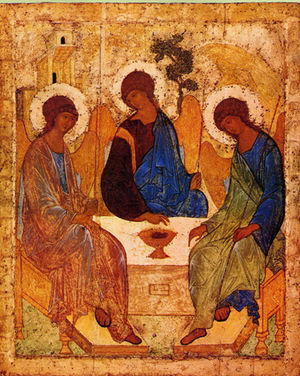 Rublev's most famous icon depicts the three angels who appeared to Abraham and Sarah. The angels are considered a type of the Holy Trinity; accordingly, this scene is the only one in which iconographers are allowed to depict God the Father.

Shining with the rays of divine light,
O venerable Andrew,
You knew Christ the wisdom and power of God.
By means of the image of the Holy Trinity
You preached to all the world the Holy Trinity in unity.
And we, with amazement and joy, cry out to you:
As you have boldness before the Most Holy Trinity
Pray that the Uncreated Light
May illumine our souls!

Like a trumpet, you clearly sounded the sweetness of divine hymns,
And were revealed as a brilliant beacon shining on the world with the light of the Trinity.
Therefore, we all cry to you, venerable Andrew:
"Unceasingly pray for us all."