From OrthodoxWiki
(Redirected from Iconographers)
Jump to: navigation, search

Iconography (from Greek: εικoνογραφία) refers to the making and liturgical use of icons, pictorial representations of Biblical scenes from the life of Jesus Christ, historical events in the life of the Church, and portraits of the saints. Icons are usually two-dimensional images and may be made of paint, mosaic, embroidery, weaving, carving, engraving, or other methods. A person who practices the art of iconography is called an iconographer.

Images have always been a vital part of the Church, but their place was the subject of the Iconoclast Controversy in the 8th and 9th centuries, especially in the East. The Sunday of Orthodoxy, the first Sunday of the Great Fast (Lent) every year celebrates the reestablishment of the Orthodox veneration of icons. The use of iconography is considered one of the most distinctive elements of the Byzantine Rite. 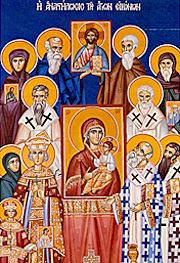 From the first centuries of Christianity, icons have been used for prayer. Orthodox Tradition tells us, for example, of the existence of an icon of the Christ during his lifetime, the Icon-Not-Made-With-Hands, and of the icons of the Theotokos immediately after him written by the All-laudable Apostle and Evangelist Luke.

Icon made by Jesus

During the time of the earthly ministry of the Savior, Abgar, ruler in the Syrian city of Edessa, was afflicted with leprosy. Reports of the great miracles performed by the Lord extended throughout Syria (Matt. 4:24) and as far as Arabia at this time. Although not having seen the Lord, Abgar believed in him and wrote a letter requesting Christ to come and heal him. Abgar sent his court painter, Ananias, with this letter to Palestine telling him to paint an image of the Divine Teacher. Ananias was not able go to near Christ because of the great many people listening to his preaching. He attempted to produce an image of the Lord Jesus Christ from afar, but could not. The Lord called Ananias and promised to send his disciple in order to heal Abgar from the leprosy and instruct him in salvation. Then the Lord called for water and a towel. He wiped His face with the towel, and on it was His Divine Image. The Savior sent the towel and a letter to Edessa back with Ananias. With thanksgiving Abgar received the sacred objects and started healing. He continued healing until the arrival of the disciple Thaddeus, Apostle of the 70. The Apostle preached the Gospel and baptized the Abgar and all living in Edessa. The story is recorded by the 4th century Church historian, Eusebius of Cesarea.

Icons made by Apostle Luke

Apostle Luke painted icons of the Most-holy Theotokos—not just one, but three—as well as icons of the Holy Apostles Peter and Paul. St. Luke wrote the first icon, of the Most Holy Theotokos Directress or Hodigitria, mentioned in the Paraklesis to the Theotokos:

Your great icon, the sacred one
Which is called Directress,
And was depicted for us
By one of the apostles,
Luke the Evangelist.
—The Service of the Small Paraklesis (GOARCH)

Icons in The Old Testament

There are several icons with unknown authors that were found done after people were praying. One such example is Prodomitra icon. The first draft was not liked by the icon writer. He prayed for help and then found the icon done.

Third example is the icon done in Pangheo Mountains to Saint Gherman. Saint Gherman wanted an icon of the Holy Mother of God. So he had several men make the support. However the piece of wood had splintered in several parts. The Saint prayed to God so that icon will be made.

Holy Mother of God appeared to Saint Gherman assuring that the icon will be done, and the wood parts had united themselves and the icon started to be self-written in a reddish light.

Many miracles are attributed to this icon, one being the healing of a child that was not able to speak or hear.

Some believe these icons are made by angels.

As we saw the icon made by Jesus did perform a miracle, helping King Abgar escape partially of leprosy. Today there are many miracle performing icons.

The most literal translation of the Greek word εικονογραφία (eikonographia) is "image writing," leading many English-speaking Orthodox Christians to insist that icons are not "painted" but rather "written." From there, further explanations are given that icons are to be understood in a manner similar to Holy Scripture—that is, they are not simply artistic compositions but rather are witnesses to the truth the way Scripture is. Far from being imaginative creations of the iconographer, they are more like scribal copies of the Bible.

While the explanation of the purpose and nature of icons is certainly true and consistent with the Church's Holy Tradition, there is a linguistic problem with the insistence on the word written rather than painted. In Greek, a painted portrait of anyone is also a γραφή (graphi), and the art of painting itself is called ζωγραφική (zographiki) while any drawing or painting can be referred to as ζωγραφιά (zographia). Ancient Greek literally uses the same root word to refer to the making of portraits and the making of icons, but distinguishes whether it is "painting from life" (ζωγραφιά) or "painting icons" (εικονογραφία). Thus, from a linguistic point of view, either all paintings—whether icons or simple portraits—are "written" or (more likely) "painted" is a perfectly usable English translation, simply making a distinction between the painting appropriate for icons and that appropriate for other kinds of painting, just as Greek does.

Painting on glass – a very ancient art introduced to Transylvania after its annexation to the Habsburg empire (1699) – had an extraordinary diffusion as a mass phenomenon as the result of a miraculous event that happened at Nicula, a village in the north of Transylvania, where on the 15th February, 1694 (some scholars say 1699) tears were seen running down the face of the Blessed Virgin on a wooden icon of the Madonna with Child in the local church. This miraculous event transformed the village into a centre of pilgrimage, the many pilgrims being anxious to obtain an image of the miraculous Madonna to take home. In this way began the great spread of the painting of icons on glass in Transylvania.

The Zosim Oancea Museum of icons on glass at Sibiel

The Fr Zosim Oancea Museum at Sibiel holds the largest existing exposition of icons on glass in Transylvania, a miracle of artistic creativity and religious inspiration born of the riches of the Orthodox Christian tradition and the imagination of Romanian peasant painters. A unique fusion of Eastern tradition and Western technique, icons on glass emerged and spread throughout this extensive region of Romania in the first decades of the eighteenth century, reaching their apogee between 1750 and the end of the nineteenth century and almost vanishing in the period between the two world wars. Begun in 1969 under the aegis of Fr Zosim Oancea, the people of Sibiel and with the help of institutions and private donors, the collection in this museum with its almost 600 masterpieces, represents all the main types of icons on glass along with works by some of the most famous icon-painters – when their names are known. A visit to the museum at Sibiel also presents the opportunity to discover the person who gave the museum its name: Fr Zosim Oancea, a truly exceptional man and priest to whose intelligent vision and indefatigable tenacity we owe this extraordinary museum in the heart of Romania.[1] 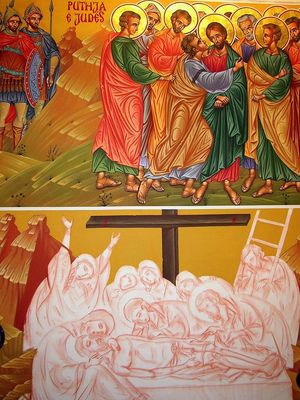 Two icons, one complete and another in process