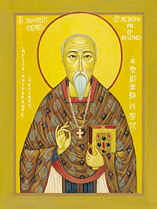 Our righteous father, hieromartyr Mitrophan Yang (Chinese Yang Ji 楊吉, some sources have Yang Jizhong or Yang Jisong) (1856-1900) was the first Chinese ordained a priest in the Church of China. He was one of the many martyrs of the Yihetuan Movement (Boxer) Uprising, whose collective feast day is June 11.

Yang Ji, the future Mitrophan, was born, probably in Beijing, on January 17, 1856, into a family of Chinese Orthodox associated with Russian Orthodox Mission in China. His father died while he was very young, and he was raised by his mother Marina, who was a teacher at a school for girls, and his grandmother Ekaterina. Yang Ji grew to be a humble person who was cautious and quiet. He was peaceful in demeanor and was impassive even when faced with great insults.

The delegation arrived the month before the meeting of the All Japan Council of 1882 which Archimandrite Flavian and Fr. Mitrophan attended. Prior to the council Bp. Nicholas ordained Mitrophan deacon on June 20 and blessed his fellow travelers, Paul and Eumenius, as readers. On June 29, 1882, Bp. Nicholas ordained Mitrophan as the first Chinese priest of the Orthodox Church. The ordination was held in the Tokyo Cross Church, that was, in the church on the second floor of the bishop’s residence on Surigadai Hill in Tokyo.

For the next fifteen years Fr. Mitrophan, in addition to attending to his priestly duties, assisted Archimandrite Flavian in translating and editing books. He served God tirelessly even as he suffered hurts and insults both from his own people and outsiders, eventually causing him a mild breakdown. For the next three years Fr. Mitrophan lived outside the Beijing mission.

On June 1, 1900, an uprising of the anti-foreigner Chinese began against Chinese Christians that came to be known as the Yihetuan Movement (Boxer) Uprising. The Beijing mission buildings were burned. Many of the refugees from the mission came to Fr. Mitrophan’s home, looking for safety. Many of these were former ill-wishers of Fr. Mitrophan, but he did not turn them away. Over the next several days Fr. Mitrophan endeavored to strengthen them in their ordeal. On June 11, a force of Boxers aided by Chinese soldiers descended on his home and began systematically torturing and killing the Christians who had taken haven there. Fr. Mitrophan was martyred sitting in the courtyard of his home where other members of his family were also tortured and died martyrs: his wife Tatiana, and three sons, Isaiah, the priest Sergei, and Ioann.