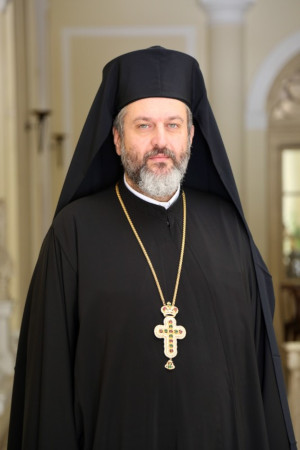 His Grace Theodoros of Babylon

His Grace Theodoros (Dridakis), Bishop of Babylon, is a titular hierarch of the Church of Alexandria.

Theodoros Dridakis was born in the village of Sellia in Rethymno, Crete, in 1966. He studied Theology at the Theological School of the University of Athens. Theodoros accepted the monastic tonsure on August 7, 1988, being ordained hierodeacon the next day at the Metropolis of Ierapytni (modern Ierapetra, Crete) by Metropolitan Philotheos (Vouzounerakis) of Ierapytni (1961–1993) or Hegumen Eugenios Politis, his successor (1994–2016).

Hierodeacon Theodoros was ordained to the holy priesthood on July 22, 2000, by Metropolitan Eugenios. He served at the churches of the Metropolis of Ierapytni. On March 25, 2002, during the Feast of Annunciation of the Mother of God, Hieromonk Theodoros received the rank of Archimandrite at her temple in the metropolis.

On December 18, 2016, Archmandrite Theodoros was elected titular Bishop of Babylon at the Church of Saint Nicholas. The ordination was performed by His Beatitude, ecumenically supported by Metropolitans Nicholas II (Antoniou) of Hermopolis, Amphilochios (Andronikakis) of Kissamos, Nikodemos II (Priangelos) of Memphis, Niphon (Tsavaris) of Pelusium, Kyrillos (Diamantakis) of Ierapytni and Meletios (Koumanis) of Carthage. He was designed Patriarchal Commissioner to Cairo.