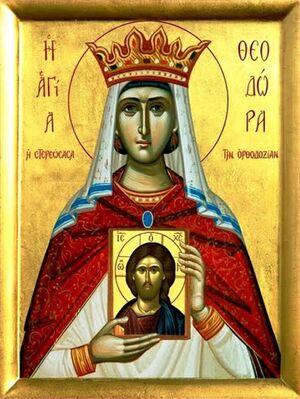 St. Theodora the Empress and Restorer of Orthodoxy

The Holy Empress Theodora, Restorer of Orthodoxy (9th century), was a pious and virtuous woman, known for having governed the realm for fifteen years after the death of her iconoclast husband Theophilus (829-842). Saint Theodora convened a Synod, at which the iconoclasts were anathematized, and the veneration of icons was reinstated. Her feast day is February 11, and the Holy Empress is also commemorated on the Sunday of Orthodoxy, the first Sunday of the Great Lent.

Little is known of her early life. Coming from Paphlagonia, Theodora descended from an aristocratic Armenian family. Theophilus' stepmother, Euphrosyne, selected her as his bride and during their marriage they had seven children, five daughters and two sons. The youngest son would succeed his father as Emperor Michael III.

Theophilus maintained the restored iconoclastic policies initiated by Leo V in 813 after the first period of restoration of veneration under Empress Irene in the late eighth century. Theodora, however, secretly was a strong believer in veneration of icons. Upon the death of Theophilus in 842, Theodora came to power as the regent for her son Michael and ended the iconoclastic policies of her husband in 843 with the backing of a church council. The proclamation of 843 restoring veneration of icons initiated the feast of the Triumph of Orthodoxy that has since been celebrated by the Orthodox Church each year on the first Sunday of Lent.

She ably governed the empire, including replenishing the treasury and fending off an attempted invasion by the Bulgarians. As Michael grew older, he came under the influence of his uncle Bardas, who undermined the authority of Theodora. In 855, he finally displaced Theodora from her regency and sent her to the Monastery of St. Euphrosyne, where she devoted herself to asceticism.

A copy of the Gospels, copied in her own hand, is known to exist.

She died peacefully around the year 867.

In 1460, the Turks gave her relics to the people of Kerkyra (Corfu).