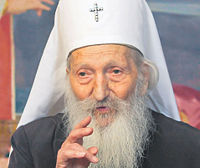 Patriarch Pavle (Paul) of the Church of Serbia

He graduated with high honors from the Fourth Male Gymnasium (high school) in Belgrade 1929. He also graduated from the seminary in Sarajevo in 1935, аnd from the Orthodox Theological Faculty in Belgrade in 1940. He did postgraduate studies at the Orthodox Theological Faculty at the University of Athens from 1955 to 1957. During his stay in Greece, he studied the New Testament and developed an expertise in liturgics, which resulted in the Patriarch becoming one of the most prolific liturgical writers in the Serbian Church. For his patient and prominent work in the field of theology, the Theological Faculty of the Serbian Orthodox Church awarded His Holiness an Honorary Doctorate of Divinity.

From 1944 to 1955, he was a monastic of Rača Monastery performing different disciplines. During the 1950/51 academic year, the then-Hierodeacon Pavel was appointed a lecturer at the Prizen Seminary, a position which he retained until his election to the Patriarchal Throne.

From that day to the present, he has faithfully shared in the plight of his suffering people. Bishop Pavel wrote and warned of the present exodus of Serbs from Kosovo, the attacks of the Albanians on Serbian monasteries, the rape of nuns, and terrorizing of pedestrians, the desecration of Serbian cemeteries and overall suffering of the Orthodox in Kosovo and in Metohija. In 1989, the then Bishop Pavel was personally beaten by several Albanian youths in Kosovo. The extent of his injuries required nearly three months of hospitalization. However, in the spirit of Christian forgiveness, he refused to press charges.

It is not without reason that Patriarch Pavel has been referred to as a "saint who walks." The simplicity of his lifestyle and his personal humility have found favor by all of those who are familiar with this virtuous man. Each of the bishops of the Serbian Orthodox Church have an automobile, which they use to travel through their dioceses. The one exception has been Patriarch Pavel. When asked why he never obtained an automobile, he replied: "I will not purchase one until every Albanian and Serbian household in Kosovo and Metohija has an automobile."

His Holiness has published Devich, The Monastery of St. Joanikije of Devich (1989), and Questions and Answers to the Church Reader (1988). For the past 20 years, he has been responsible for the column in the Glasnik of the Serbian Patriarchate known as Questions and Answers, dealing with liturgical and sacramental questions. Through his efforts the Holy Synod published the new version of Srbljak in 1968. He also coordinated the reproduction of liturgical studies Christian Feasts by M. Skabalanovich, published originally in Kiev in 1915 in six volumes. The most monumental contribution of H. H. Patriarch Pavel was the translation of the New Testament published in 1984 under his supervision. This was the first official Serbian translation of the New Testament approved by the Serbian Orthodox Church. If all Bishop Pavel's works were published, there would be thousands of pages and many volumes. Patriarch Pavel exemplifies simplicity in his lifestyle and is the embodiment of humility and personal holiness, a most worthy helmsman to guide the "Ship of the Church" in these troubled times.

During his tenure as patriarch, Pavel has healed the schism with the Free Serbian Orthodox Church, now known as the New Gračanica Metropolitanate, and he has made efforts to heal the current schism in Macedonia with so-called Macedonian Orthodox Church, which is considered uncanonical by the Ecumenical Patriarchate and other Eastern Orthodox churches.

Three new seminaries have been established: in Cetinje (1992), in Kragujevac (2000), and Foča (2001). The Orthodox Theological Faculty was restored at Belgrade University in 2004. His Holiness is very popular among people and often referred as walking saint in press.