His Beatitude, Metropolitan Nestor (Anisimov) of Kamchatka was a missionary bishop to the Kamchatka region of eastern Russia in the early twentieth century. Forced by the Bolsheviks to leave Russia he move to Harbin, Manchuria where he established a representation for the Kamchatka diocese. After World War II ended he was enthroned as the ruling bishop of the Harbin Diocese. Arrested for activities related to the Local Council of 1917-1918, he was a prisoner in the Gulag for nine years. 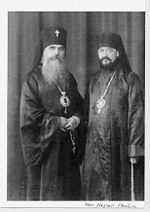 Archbishops Sergius of Japan and Nestor of Kamchatka, 1929

Nikolai Aleksandrovich Anisimov was born in the town of Vyatka. Differing sources give his date of birth as November 9, 1884 and November 8, 1885. His father was military officer and his mother was the daughter of a protopriest. He attended normal school in Kazan, Russia. Upon completing the normal school he entered the Transfiguration of the Savior Monastery in Kazan as a novice, from where he enrolled in the missionary department of the Kazan Theological Academy.

In 1907, with a blessing from John of Kronstadt, Nikolai decided to devote himself to work as a missionary. On April 17, 1907, Nikolai received his tonsure as a monk and received the name Nestor in honor of St Nestor the Chronologist. On May 6, 1907 he was ordained a deacon, followed three days late, on May 9, with his ordination as a priest. On June 2, 1907, he departed Kazan for Kamchatka, in far eastern Russia to begin his missionary service. In the foot steps of the earlier missionaries, St Innocent of Moscow and Nicholas and Sergius of Japan, Fr. Nestor learned the local Tungus and Koryak languages and began translation of the Divine Liturgy and the Gospels into these languages. For the translations, Fr. Nestor was elevated to hegumen in 1913.

Realizing the immensity of his mission, Fr Nestor conceived the idea of a charitable brotherhood for the Kamchatka mission. In 1910, with the blessing of his bishop and after great efforts among the royalty and citizens in St Petersburg, the Charitable Kamchatkan Brotherhood was established in Vladivostok on September 14, 1910. Soon sections of the brotherhood formed in many of the major cities of Russia, including Moscow, St Petersburg, and Kiev. Through the Brotherhood, funds, liturgical vessels, and assistance was provided that built many churches, chapels, schools, and hospitals in Kamchatka.

With the start of World War I, Fr. Nestor returned to western Russia, where he participated in the battle front medical care efforts, including rescuing wounded from the battlefield and caring for the wounds and providing both physical and spiritual comfort. Near the end of 1915, Fr Nestor was relieved of his war time duties. He was elevated to archimandrite and returned to his mission in Kamchatka. On October 16, 1915, Fr Nestor was consecrated a bishop and appointed the ruling bishop of the newly formed Diocese of Kamchatka.

In 1917, Bp. Nestor returned again to western Russia to participate in the Local Council of 1917-1918. As part of a commission under Metr. Benjamin of St Petersburg to evaluate damages to the Moscow Kremlin during the October 1917 events, Fr. Nestor published the results of study in a book Shooting of the Moscow Kremlin that resulted in his arrest by the Bolsheviks and his imprisonment for a month. In 1919, he returned to Kamchatka with great difficulty through a roundabout route of Kiev, Odessa, Turkey, Egypt, India, and China as the direct route through Siberia was blocked by the Russian civil war. His stay in Kamchatka was short as he was soon exiled by the Bolsheviks.

The nearest place free of Bolsheviks was Manchuria in China. The area had a large population of Orthodox Russians, as the Russians had been building Chinese Eastern Railway, a direct route for the Trans-Siberian railway through Manchuria to Vladivostok. In 1921, Bp. Nestor arrived in the principal city of Harbin where he established a representation of the Diocese of Kamchatka.

Through the twenties and thirties, Bp. Nestor participated in the religious activities in Manchuria as well as in Japan, including participation in the re-consecration on December 15, 1929 of the Holy Resurrection Cathedral (Nicolai-do) in Tokyo, Japan. He participated in the consecration of Nicholas (Ono) as the first Japanese bishop at St Nicholas Cathedral in Harbin on April 6, 1941.

He established a House of Mercy to provide aid to destitute victim of the turmoil of the Russian civil war. In 1933, Bp. Nestor was elevated to archbishop. Also, during these decades Bp. Nestor visited many exiled hierarchs in Europe and Asia as well as participating in missionary work in India and Ceylon (now Sri Lanka).

With the end of World War II, Abp. Nestor re-established communications with the Moscow Patriarchate and, in 1946, Patriarch Alexei I elevated Abp. Nestor to Metropolitan. The Patriarch also appointed Metr. Nestor the ruling bishop of the Exarchate of Harbin and All Manchuria.

On June 14, 1948, as Metr. Nestor and his party were making final preparation to travel to Moscow for a major church celebration at the invitation of the Moscow Patriarchate, he was arrested by Chinese police on charges of being a Japanese spy and seemingly disappeared. The Chinese authorities turned him over to the Soviets, who charged him with a number of offenses including the publication of the report Shooting of the Moscow Kremlin, organizing in 1922 of a local council in Valdivostok, and other charges. Imprisoned, initially without the knowledge of the Moscow Patriarchate, Metr. Nestor entered the Soviet Gulag system until his release in 1956.

Upon his release in 1956 the Patriarchate appointed him Metropolitan of Novosibirsk and Barnaul until 1958 when he was appointed Metropolitan of Kirovgrad and Nikolaevsk. He remained active in his dioceses, preaching the Word of God and fighting the closure of churches by the Bolshevik authorities. Metr. Nestor reposed October 22, 1962 and was buried in the courtyard of the Patriarchal representation church of the Holy Trinity-St. Sergius Lavra in Peredelkino.