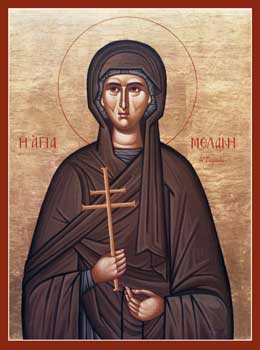 Our venerable Mother Melania the Younger (or Melane the Roman - feastday: December 31) lived during the reign of king Honorios, son of Theodosios the Great, in 400. She came from a rich and glorious family. Her grandmother is also commemorated as a saint: Melania the Righteous (June 8). Because she loved the Lord with her whole heart, she chose to remain a virgin. But her parents forced her to get married even unwillingly with a man and she became the mother of two children. Then her parents and children died. That is why this blessed woman left the city of Rome and was living at her farm with every ascetic practice and virtue. She used to take care of the sick, received the foreigners who came to her, and visited the imprisoned and the exiled. Then she sold all her estates and possessions, which were many, and collected 120,000 gold coins, which she distributed to churches and monasteries.

In the beginning she used to eat once every couple of days but later on she used to fast five days per week and she would only eat on Saturdays and Sundays. So, this saint of blessed memory got used to and was trained in every ascetic practice with a lot of knowledge and discretion. She also used to write with a calligraphic hand in a very nice and artistic way.

Then she went to Africa and, after she had spent seven years there distributing most of her wealth, she went to Alexandria and from there to Jerusalem. There she closed herself in a cell and with her example she attracted ninety virgins and nuns to this same zeal for asceticism. She used to provide for their daily needs unceasingly. Because she was overcome by the pain of the side, she got very sick and, after she had called the bishop of Eleutheroupolis, she received from him the Eucharist. Then she bid all the sisters farewell, and lastly uttered these words of Job: "As the Lord wishes, so let it be." And in this way she immediately commended her soul to the hands of God.

In your fervent desire for the angelic life,
You renounced the comforts of this earth.
In watchfulness you practiced sobriety and deep humility.
Therefore, most wise Melania, you became a pure vessel
Filled by the Holy Spirit, who adorned you with gifts,
Attracting all to your divine fervor,
Leading them to the Master and Savior of our souls.

You tread to the end of the path of virtue and were betrothed to God the Word.
You rejoiced in the contest, O Anysia;
And you, O Melania, shone with the light of dispassion,
Together, radiant with virtue in the world.
And now we ask you to implore Christ the Lord that he may be gracious to us!

Your soul radiated light from the One born for us of the Virgin,
And you shone with virtues, O saint worthy of all praise.
By giving away your possessions on earth
You stored up treasures in Heaven,
Showing a wonderful example of the ascetic life.
Therefore, O holy Melania, we honor you with love.

Like a lamp with two flames you illumine Christ’s Church
With mystical radiance.
In your martyr’s contest you brought forth fruits a hundred-fold, O Anysia;
And you, O Melania, were resplendent in asceticism.
You were found worthy of the incorruptible life of the blessed!