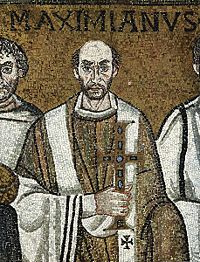 Our father among the saints Maximian of Ravenna, also Maximianus, was a sixth century Bishop of Ravenna. He is remembered principally for his association with the completion of the Church of St. Vitale and his ivory throne. His feast day is February 22.

Little is known of his early life. Maximian is believed to have been born about 499 in the Istrian city of Pola, in what is now Croatia. He became a deacon and, in 546, Pope Vigilius of Rome consecrated him in Patras, Greece as bishop of Ravenna. He was apparently selected by emperor Justinian. According to the priest Andreas Agnellus of Ravenna, Maximian's congregation at first did not accept his leadership, objecting to his appointment by the emperor, as he was not their first choice as a candidate.

Bishop Maximian was active in building churches in Ravenna. In addition to completing the octagonall shaped Church of San Vitale, on May 9, 549, he consecrated the new basilica, St. Apollinare en Classe. His likeness appears in the famous mosaic of the procession of emperor Justinian and his retinue in the left apse wall of the Church of St. Vitale.

He also involved himself in the furnishing for the temples. His most remarkable piece was the Throne of Maximian, the cathedra for a bishop that was made completely out of ivory panels. The panels were probably carved in Constantinople and then shipped to Ravenna.