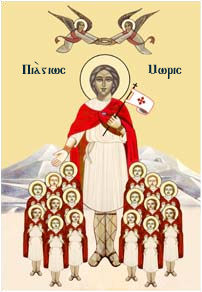 Saint Maurice was the leader of the legendary Roman Theban Legion in the 3rd century.

The traditional story is that the legion, entirely composed of Christians, had been called from Thebes (Egypt) to go to Gaul, to assist Emperor Maximian, which they did valiantly. However, when Maximian ordered them to harass some local Christians, they refused, and Maximian ordered the unit punished. Every tenth soldier was killed, a military punishment known as decimation. More orders followed, they still refused, due in part to encouragement from St. Maurice, and a second decimation was ordered. In response to their refusal to use violence against fellow Chistians, Maximian ordered all the remaining members of the 6,600-man unit executed. The place in Switzerland where this occurred, known as Agaunum, is now Saint Maurice-en-Valais, site of the Abbey of Saint Maurice-en-Valais.

So reads the earliest account of their martyrdom, according to the public letter of Eucherius, bishop of Lyons (c. 434 – 450), addressed to his fellow bishop Salvius. Alternate versions have the legion refusing Maximian's orders only after discovering a town they had just destroyed had been inhabited by innocent Christians, or that the emperor had them executed when they refused to sacrifice to the Roman gods.

Saint Maurice became a patron saint of the Holy Roman Emperors. In 926, Henry I (919-936), even ceded the present Swiss canton of Aargau to the abbey, in return for the sacred lance of the saint's. The Sword of Saint Maurice was part of the regalia used at coronations of the Austro-Hungarian Emperors until 1916.

The Indian Ocean island state of Mauritius was named after Maurice of Nassau, a member of the House of Orange, and not directly after St. Maurice himself.