The Venerable Makarii, Missionary to the Altai (1792-1847) was a Russian archimandrite who founded the Altai mission in 1830. In the year 2000, the Russian Orthodox Church glorified him as a saint, commemorated on May 18. 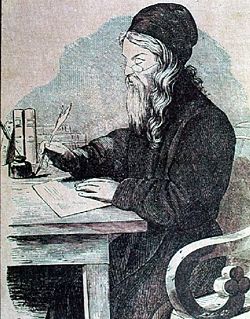 His father being a priest, Mikhail studied at ecclesiastical schools in Smolensk, then enrolled in the St. Petersburg Academy, where he studied from 1813 to 1817. [2] At this time he met his future spiritual father, Filaret, later Metropolitan of Moscow. [3] He also developed an interest in the Philokalia;[4] the writings of Protestant mystics such as Jung-Stilling and Johann Arndt;[5] Quakerism;[6] and the Russian Bible Society.[7]

In 1818 Makarii (as he was now called) was tonsured as a monk, ordained as a priest, and enrolled at the Lavra of the Caves in Kiev. [8] In 1821, he transferred to Kostroma Seminary, where he received the rank of archimandrite. [9] At this time his confessor, Fr. Liverii, introduced him to the practice of hesychasm. He also met St. Seraphim of Sarov, who had just emerged from forty years of seclusion. [10]

Fr. Makarii left Kostroma in 1824, apparently out of a desire for the cenobitic life, coupled with frustration over his administrative role. He eventually settled in the Glinsk Hermitage in Putivl village, near Kursk. [11] There he conceived of the idea of becoming a missionary to Siberia.[12]

In 1829 Fr. Makarii's application to become a missionary priest to Siberia was accepted, and he left for Tobolsk. The following year he moved to Biisk as superior of a new Altai mission.[13] His work there fell under the authority of Tobolsk Archbishop Evgenii Kazantsev (who served in that capacity from 1825 to 1831),[14] and then Archbishop Afanasia Protopov. [15]

At first Fr. Makarii and his several companions made Biisk their central mission station. In 1831 they relocated to Maima, a village to the south whose location offered various advantages. In 1835 the central station was moved to nearby Ulala (present-day Gorno-Altaisk).[16]

Fr. Makarii's first convert was one Elesk, an Ulala native who received the baptismal name of Ioann. [17] According to his records, Fr. Makarii made a total of 675 converts, and baptized 1,047 children (of which 764 were native Altaian and 283 Russian). [18]

Fr. Makarii established a rule for the missionaries under which they were to share goods in common. This rule was maintained until after his death. [19] The result was a relatively communitarian social structure in the villages which he supervised--similar, perhaps, to the cenobitic system which he admired.

Fr. Makarii established five Christian villages, in which Russian missionary families guided Altaian natives to adopt a sedentary agricultural lifestyle as well as the Orthodox Christian faith. He also founded two schools, a "poor house," and a hospital. By the onset of World War I, the number of villages had swelled to more than 180, and the number of baptized Altaians to perhaps 40,000, representing 55 percent of the native population. The mission hierarchy grew with corresponding complexity. [20]

Opposition emerged not only from local shamans and other pagan leaders, but also from the "priestless" Old Believers (bespopovtsy) in the area, as well as certain civil authorities and members of the "white" clergy who had grown accustomed to benefitting financially from their clerical status. [21]

Fr. Makarii was unusual in his support for women missionaries. A longtime supporter of the restoration of the female diaconate,[22] he recruited several umarried women to join his work in Altai as nurses and teachers. [23]

Between 1839 and 1840, Fr. Makarii departed the Altai for a fund-raising tour of several Russian cities. Funds thus raised were sufficient to finance boys' and girls' schools in Ulala and Maima.[24]

In 1842 he asked to be relieved of his post in Siberia, citing ill health. Rather than the hoped-for permission to make the pilgrimage to Jerusalem, however, Fr. Makarii instead received appointment as abbot of Bolkov Monastery (Orlov diocese).[25]

By World War I, the Altai mission established by Fr. Makarii had succeeded in converting over half of the region's native population, and organizing native followers into a network of Christian villages (whereas before most had been nomadic pastoralists). Some eighty-two schools of various types were established, along with rudimentary medical care. James Lawton Haney writes,

"The most progressive among the Church's eight Siberian missions, these schools were operated primarily for the benefit of the native Altai people, although they also served Russians. Through instruction in the Orthodox faith they served to integrate the students into the Church, but they also offered them their only hope for entrance into the modern world through basic education. [...] It is undeniable that these schools served the state's colonial interests in the Russification of the native population. Due to the fact that classes were held in the Altai language and the fact that many teachers were of Altaian or part-Altaian heritage, however, the mission schools also provided the Altai people with a vision of a new social identity beyond the village or tribe. Even Soviet researchers have acknowledged that the schools played a significant role in cultural development of the Altai people."[28]

The 1917 Russian Revolution essentially destroyed this network of communities. Also of note was the 1904 Burkhanist movement, a native Altaian religious movement which arose in opposition to Christianity and Russian rule.

"Is it not true that the first teachers of humans from birth have been essentially women? Were they not the first to teach us to think and speak? Were they not the first to sow the seeds of good and evil in the hearts of children in family activities? What has the Russian Church done for the Christian education of women among ordinary people? For the benefit of boys Russians were the last in the world to plan schools in villages: but you poor girls, you future mothers of generations, are you not human, are you not Russians? Have you not been atoned for and received jewels from the crown of Jesus Christ? Do you not need to know and love that One in whom you believe?" .[30]

On the construction of church buildings in remote villages:

"Their architecture...[should] be simple so that the parishoners themselves could build them: the belfry should have a large bell, a fancy cupola; also, a multitude of high windows and large decorated doors. All this should be done in accord with the humble station of the people; however, it should be a correct building....The holy vessels in their churches should all be tin, but correct and of pleasant design; the clergy's vestments proper for the church and for the village--clean, but not rich; the iconostasis not large, consisting of a few, but proper, even fine, holy icons...the Gospel on the altar should be covered in a modest silk cloth with icons of the evangelists and of the Resurrection of Christ."[31]

On missionary work among the Altaians:

"Their intellectual faculties were so poorly developed, that it seems as though they cannot feel the soul in themselves; and the range of their thoughts and desires, their hopes and fears, their joys and sorrows, is limited to bodily needs. What is the missionary to do with them? Is he to be satisfied with spreading the faith alone? But not many from among them are in agreement with it; and fewer still who can understand it. Should one begin to speak to them about heaven? They think only about bread, and after sermons they engage in conversation only about how they have nothing from which to make bread for themselves. How should one approach a sick man? Should one speak to him about the soul, about eternal torment, about paradise? In response to this he points to the wounds on his body and, looking at the preacher with a languishing gaze, asks "Em'-bar-ba?" Do you have no medicine? And so, what is one to do with him?"[32]

"The collection of Tatar words and sayings we have accumulated is like a beggar's sack in which there are all kinds of bread scraps, soft and hard, wheat and rye, fresh and stale--and when put together make a heavy load. These were our achievements through becoming acquainted with the different dialects used in the different native tribes. Here there was information from different sources we came across in our travel. Here there were Kumandin, Chern' Tatar, Teleut, and Altai words. It was so much of a mishmash heaped together that it was not easy to bring this chaotic mixture into any kind of harmonious order. I thought, what could one possibly get out of all this except remarkable nonsense? Among all these dialects--which were all related, but different from one another--it was necessary to adopt the most widely-used; to compile a dictionary of the dialect in the usual order; to note down, as far as possible, especially, the peculiarities of other districts; and, in such a manner, learn one and become acquainted little by little with another. We were already able to present to the natives the essential teachings of the faith and welcome them into the church of Christ in the Chern' Tatar and Altai dialects; but in transposing the Holy Scriptures to that or another dialact, it was not possible to take even a single step without an interpreter."[33]

On the importance of consistent long-term policies in the mission field:

"Work done without conservation is vanity and fuss."[34]

On being offered some squirrels by natives as a present:

"Altai people! Altai people! Your squirrels have their burrows, but Christ has no place to lay his head."[35]

On hope in God:

"Let us be mistrustful of our own feelings...stand firm, let us not be hypocritical in our faith and in our devotion to Jesus Christ. Do not place hope in yourself but set all your hopes in God--that is the first lesson incumbent upon you to learn."[37]

"The Lord tames the proud and gives his blessing to the humble. Learn from our Saviour to be humble until the end of life. Dig this well deep; the more living water there is, the more abundantly God's love will be poured into our hearts by the Holy Spirit."[38]

On music (from a letter to Princess Trubetskaia):

"I would like you to be more diligent in noble music; it is an art that elevates the soul."[39]

"My God, be the essence of my feelings, my searchings, my meditations, and all my actions. Act in me, that all I begin to do, I would perform for the glory of Your name, that I would serve my fellow creatures filled with Your love. Send down your Holy Spirit into my heart. Let your Holy Spirit lead me from the beginning until the end and let Him be in me as will, deed, and achievement."[41]