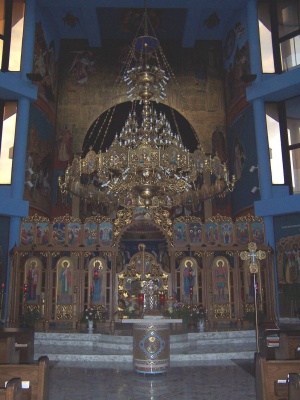 A Ukrainian iconostasis with two tiers in the Modern Kozak style

An iconostasis (also iconostas or icon screen) is a screen or wall which serves as a stable support for icons and marks the boundary between the nave and the altar or sanctuary. The term can also refer to a folding, portable set of icons. There has been historically and continues to be a vast range of styles for iconostases: Some are simply two icons of the Theotokos and the Lord; the most complex, cathedral icon screens have multiple tiers with many icons per tier. The iconostasis is perhaps the most distintive feature of Byzantine Rite churches. It evolved from the Byzantine templon, originally a small rail without icons that marked the boundary between the nave and the altar.

A number of guidelines or rubrics govern which icons are on which parts of the iconostasis, although there is some room for variation. There are also guidelines for who should enter or leave the altar by which door. These guidelines were developed over the course of many centuries, with both theologically symbolic and practical reasons for them.

Though they vary in size, shape and number of icons, the following is a basic layout of an icon screen which one might find in typical parish church.

If there is a second tier, it will usually contain icons of the Twelve Great Feasts. Other tiers will depict the patriarchs, prophets and apostles.