The word diptychs comes from Greek meaning "folding boards." It is two boards connected with a hinge. The word is used in the Church today to describe a type of icon or two kinds of lists. 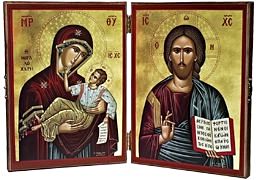 A diptych is a type of icon whereby two panels are joined together with a hinge, so that they may fold together for protection when traveling, and then be unfolded for veneration when one's destination has been reached. Such diptychs are also called "traveling icons". Most often, the images on the two panels will be Christ and the Theotokos.

The diptychs is a list of names of the living and departed that are commemorated by the parish during the Divine Liturgy. The living are inscribed on one side of the diptych, and the departed on the other. When a living member departs, the name is crossed off on side and entered on the other. More common today, the list is on folded cardboard or in a booklet.