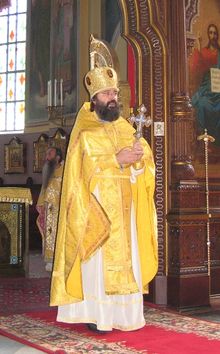 His Eminence Archbishop Elisey (secular name Ilya Vladimirovich Ganaba, Russian: Илья Владимирович Ганаба) is a bishop of the Russian Orthodox Church. He is currently Archbishop of the Hague and Netherlands. During 2007-2017 he served ruling hierarch of the Diocese of Sourozh in Great Britain and Ireland.

Ilya was born on August 1, 1962 in Leningrad, USSR. His father Vladimir Ganaba was an archdeacon at the Holy Trinity Cathedral in Podolsk in the Moscow Oblast. Later, his older brother, Alexander Ganaba, served as archpriest and dean at the same cathedral.

By the Paschal season of 1997 Metropolitan Kyrill of Smolensk and Kaliningrad elevated Fr. Eliseus to the dignity of archimandrite.