Boris I of Bulgaria 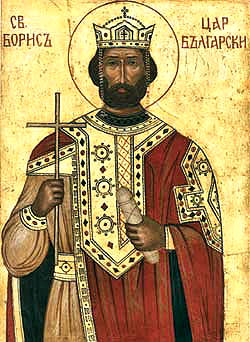 Boris I of Bulgaria

The holy and right-believing Tsar Boris I of Bulgaria, also Boris-Michael, was the ruler of Bulgaria during the latter part of the ninth century as the Knyaz of the Bulgarian Empire and led the conversion of the Bulgarian people to Orthodox Christianity. He ruled from 852 to 889. St. Boris is commemorated on May 2. He is remembered as Equal of the Apostles, Prince and Baptizer of Bulgaria.

The date of Boris' birth is unknown. His father, Presian I, was the Khan of Bulgaria, a realm that had expanded during the prior centuries in the northeastern Balkans. This, Boris inherited in 852. Populated by proto-Bulgarians together with Slavic tribes, the population of the realm consisted of diverse religions, ethnicities, and languages that Boris looked to unify by the introduction of a common and compulsory religion for all his subjects as one of the preconditions for the formation of a united state.

The development of the Bulgarian Empire took place against the Frankish realms in the west and that of the Eastern Romans in the southeast. In addition to the resultant warfare and alliances among the forces, a rivalry developed between Rome and Constantinople for jurisdiction in the Bulgarian empire as Boris was choosing the Christianity that he would bring to his people. As Khan Boris was leaning toward Rome, emperor Michael of Constantinople invaded Bulgaria. Receiving news of the invasion, Boris began negotiations for peace. The one demand by Michael was that Boris accept Christianity from Constantinople rather than Rome. In return, some lands in Macedonia were return to Boris.

In 864, Boris was baptized, receiving the name Michael after emperor Michael III who was his godfather by proxy. He then assumed a new title of Knyaz having discarded the title Khan. With the acceptance by Boris of the Christian faith of Constantinople, the traditional state religion Tengriism was abolished leaving a discontent among some of the nobility and the people. An independent status for the diocese of Bulgaria, also, remained an issue for Boris as Constantinople demanded jurisdiction. A skillful diplomat, Boris successfully exploited the conflict between the Patriarchate of Constantinople and Roman Papacy to secure autocephaly for the Bulgarian Church, confirmed during the 869 Council of Constantinople that concluded on March 7, 870, thus dealing with the nobility's concerns about Byzantine interference in Bulgaria's internal affairs.

Boris was active in spreading Christianity among the Bulgarian people, in organizing the Bulgarian church as an independent institution, and in building churches throughout the country. In 885, he gave asylum to the disciples of Cyril and Methodius, who had been driven out of Moravia. Actively supported by Boris, these disciples founded centers of Slavic learning at Pliska, Preslav, and Ohrid. With intensive work by the Slavic scholars, the Slavic language came to replace Greek in church services and in literary life, and become the country’s official language.

In 889, Boris abdicated and became a monk. Yet, he retained the right to take an active part in the government of the state. After he abdicated, his eldest son and successor, Vladimir, tried to restore the old pagan religion. Offended, Boris returned to active politics, and with the aid of loyal boyars and the army, he deposed his son, replacing him with his third son, whose rule gained him the title Simeon the Great. These changes were affirmed at the 893 Council of Preslav that also banished the Byzantine clergy and replaced them with Bulgarian clergy. Also, the Council moved the capital to Preslav and replaced the liturgy in Greek with one in Old Church Slavonic, as the official language of the Bulgarian Church and the state.

Having set the Bulgarian state in order, Boris returned to a monastic life and reposed on May 2, 907.