The Orthodox Archdiocese of Ohrid (Macedonian: Православна Охридска Архиепископија) is an autonomous Orthodox church whose primate is confirmed by the Church of Serbia. It was established in 2002 when Metropolitan Jovan of Veles and Povardarje, part of the canonically unrecognized Macedonian Orthodox Church, accepted the Niš agreement.[1]

On May 24, 2005, during the Feast of Ss. Cyril and Methodius, the Holy Assembly of Bishops of the Serbian Orthodox Church granted autonomy to the archdiocese.

The Archdiocese of Ohrid is in full communion with all other Orthodox churches.

The current Archbishop of Ohrid and Metropolitan of Skopje is Jovan (Vraniškovski). 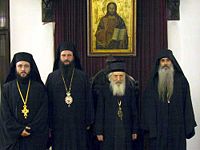 The Holy Synod of Bishops of the autonomous Ohrid Archbishopric with the Patriarch Paul of Serbia, 2004

The Holy Synod of bishops was constituted on December 23, 2003 in the monastery "Saint John Chrysostom". The current members of the Synod are:

Upon entering in the canonical and ecclesiastical unity with the Serbian Orthodox Church, and through that with the whole community of Orthodox Churches, the Archbishop kyr kyr Jovan was illegally and brutally expelled by the police, without a court order, from his residence and cathedra in Veles on July 7, 2002.

In the same manner, illegally and without a court order, the monks of four monasteries, were expelled from their monasteries, i.e. homes, in January 2004, immediately after joining the Orthodox Ohrid Archbishopric.

The destruction of the church in the monastery "Saint John Chrysostom"

A fifth monastery, in the village Nizepole, was broken into by armed and masked men, who not finding the Archbishop Jovan they were after, harassed and threatened the nuns with machine-guns, cut their hair and set the monastery on fire, in February 2004. The police refused to investigate the case.

The declaratively secular state legalized its identification with a specific religious community – the Schismatic Macedonian Orthodox Church (MOC), through the Parliament’s "Declaration for support of the autocephaly of the MOC" reached on January 23, 2004;

The Church in the "Saint John Chrysostom" monastery was demolished by the state authorities in October 2004.

Archbishop Jovan was sentenced to 18 months of prison in June 2005 for "Instigation of ethnic, racial and religious hatred, discord and intolerance". The verdict stated the conviction relied on these three points:

He served 220 days in prison before the Constitutional court declared the last two of the three points to be unconstitutional and his sentence was shortened to 8 months.

Archbishop Jovan was sentenced for the second time, on charges for "Embezzlement", and as a second defendant was sentenced to a higher prison term of 2 years than the first defendant (who was sentenced 1 year and 3 months) in 2006. He served 256 days before being released.

The chapel "St. Nectarios of Aegina", after being broken into and vandalized on several occasions, was at the end completely demolished in July 2005, before the eyes of the police.

The priest who served at that chapel, Fr. Borjan Vitanov, was beaten up twice. The police refused to investigate the case.

Bishop Marko was beaten up while serving at a public graveyard. The police again refused to investigate the case.

The clergy of the Orthodox Ohrid Archbishopric is constantly being harassed at the border-crossings by the police.

The clergy of other orthodox churches is not allowed to enter the country.

The state, against the law, denies the official registration of the Orthodox Ohrid Archbishopric.

Archbishop Jovan has been put on trial for the third time, for a third case of "embezzelment". As his attorney was not able to attend a court hearing, having a greater priority court case at the same time, the Archbishop is sentenced detention.

Reactions of the Orthodox churches 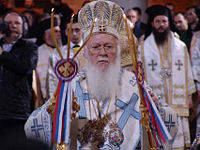 Holy Synod Of Hierarchs Of The Church of Greece expressed a severe protest for an emergent release of Archbishop Jovan from prison, and for respect of religious freedom in FYROM [4]

Standing Conference of the Canonical Orthodox Bishops in the Americas

Reactions of secular institutions and organizations

US Mission to the OSCE

The US Mission to the OSCE warned of Violation of freedom of religion and encouraged the authorities to apply the law fairly, advising the government should avoid involving in religious disputes, reminding that Article Nine of the European Convention on Human Rights and Article 19 of the Macedonian Constitution as well as Macedonia’s OSCE commitments, and international norms, all guarantee his right to freedom of religion.[13]

Amnesty International declared the Archbishop Jovan a prisoner of conscience. [14]

The Helsinki Committee for Human Rights constantly reports about the violation of the religious freedoms and human rights of the members of the Orthodox Ohrid Archbishopric: The violation of several basic rights was the result of activities of a number of state institutions (especially the Ministry of the Interior) directed against not only the followers (monks of the MOC who were supporting Vraniskovski), but also against citizens who approve of him or had compassionate sentiments or attitude towards them. This can be illustrated by the following: problems upon entry and exit from the state, threats, police detention, lawsuits against citizens who have provided housing for the outcast monks, police ban in the exercise of the right to residence [15], [16], [17] etc.