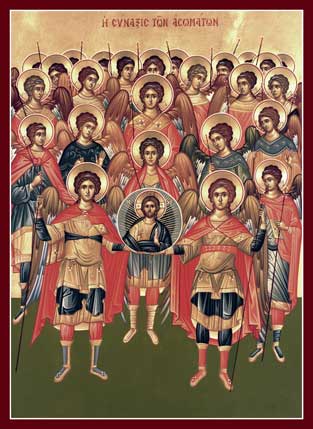 Synaxis of the Archangels

The Archangels are called the great heralds of good news, announcing the great and most glorious. Their service (as St. Dionysius the Areopagite says) consists in revealing prophecies, knowledge, and understanding of God's will which they receive from the higher orders of angels and announce to the lower order, i.e., the angels, and through them, to men. St. Gregory the Dialogist says that the archangels strengthen people in the holy faith, enlightening their minds with the light of knowledge of the holy Gospel and revealing the mysteries of devout faith.

As it is shown in the Book of the Holy Prophet Ezekiel throughout (compare with the Book of Revelation), the first four archangels (Michael, Gabriel, Raphel, Uriel) are the ones that stand in the four corners of The Great Throne of God (the Ma'aseh Merkabah). Together with them stand the four six-winged Living Creatures (Ayyot), the four many-eyed Cherubim—having four arms, four wings and four faces each—and the four many-eyed Wheels (Ophannim) or Storm-Winds (Galgallim), which Christians, (according to the example of the Great Apostle Paul and that of his illustrious disciple, St. Dionysius the Areopagite) call Thrones. These four archangels are the ones that protected the four camps of the people of Israel in the wilderness: to the North, to the South, to the East and to the West. They are the angels of the four winds, according to the Scripture that says: "[You] Who maketh his angels spirits [literally, winds]; his ministers a flaming fire" (Psalms 104:4, KJV).

The ancient rabbis always connected the seven archangels with the seven then known planets: the Sun, the Moon, Mars, Mercury, Jupiter, Venus, and Saturn; and the Church Fathers have always thought and taught that God rules this Universe through his Celestial Armies. There are three (irreducible) lists of these seven archangels. One comes from the Book of Enoch, (which is accepted as canonical by the Ethiopian Orthodox Church, itself representative of the Oriental Orthodox churches). The second is from the tradition of the Chalcedonian Orthodox Church (which, interestingly enough, coincides with that of the Gnostics, an ancient heresy). Finally, the third comes from such great Church Fathers as Sts. Dionysius the Areopagite and Gregory the Theologian. All of these three different lists, however, agree on the names of the first four archangels: Michael, Gabriel, Raphael, Uriel. The remaining three are given as follows:

The explanation and translation of all of these names can be seen below, but the Oriental and Eastern traditions have one more archangel in common, namely the sixth, called Selaphiel. Likewise, it's worth noting that the last three archangels of the Eastern tradition represent the three forms, or types, of prayer: blessing, supplication and praise. Also, Zadkiel is one of two standard bearers (along with Zophiel) who follow directly behind the Archangel Michael as the head archangel enters battle. 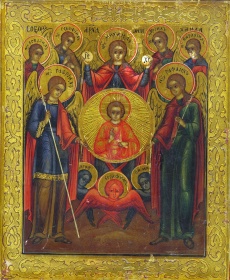 Synaxis of the Bodiless Powers, with the names of the seven Archangels inscribed, together with a seraphim (in red) and two cherubim (dark blue), and Christ in the center