Saint Anysia the Virgin martyr of Thessaloniki was born in Thessaloniki and died around 304 AD. The Church commemorates her feast-day December 30.

Anysia was born and lived in Thessaloniki during the Diocletian-Maximian persectutions (284-305). She was the daughter of both rich, but very pious parents. After her parents' death, Anysia lived a very quiet and God pleasing life fulfilling his commandements. She was not overwhelmed by the wealth she inherited rather she took private vows of poverty and chastity and used her wealth to help the poor. Her fear of God became widespread even amongst the idolaters. One day as she was heading off to church she met a Roman pagan soldier. This soldier arrested her against her will and dragged her to a temple to worship to the sun god. Anysia refused and confessed her faith in the one and true God, Jesus Christ. The soldier was so enraged by her response that he abused her even more and started to blaspheme the name of God. Anysia unable to hear his blasphemy spat in his face and covered her face with a veil. Embaressed and angered by her actions, the soldier ripped the veil away from her face to peer at her and drove a sword into her side immediately killing her.[1]

The relics of St. Anysia are contained on the left-hand side in the Church of St. Demetrios in Thessaloniki. 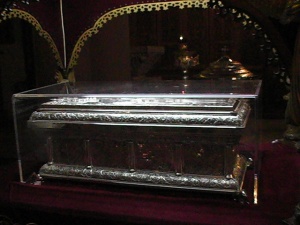 Kontakion in the Third Tone [2]

As a doubly-shining lamp of truly mystical brightness
do ye shine upon the Church like a high-towering beacon:
thou with beams of martyr's glory, O Anysia;
thou with rays of great ascetic deeds, O Melania.
Now together ye are honoured by Christ your Bridegroom for your travails in His Name.