Fr. Alexander Schmemann was born in Estonia to Russian émigrés. His family moved to France, where he received his university education. He married Juliana Osorguine in 1943, before completing his theological studies at the Orthodox Theological Institute of St. Sergius in Paris and was ordained a priest in 1946 by Archbishop Vladimir (Tikhonitsky). 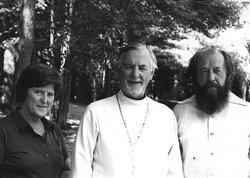 From 1946 to 1951, Fr. Alexander taught Church History at St. Sergius. He was invited to join the faculty of St. Vladimir's Seminary (then in New York City), where he taught from 1951 onwards. When the seminary moved to its present campus in Crestwood, New York in 1962, Fr. Alexander assumed the post of dean, which he would hold until his death. He also served as adjunct professor at Columbia University, New York University, Union Theological Seminary and General Theological Seminary in New York. Much of his focus at St. Vladimir's was on liturgical theology, which emphasizes the liturgical tradition of the Church as a major sign and expression of the Christian faith.

Fr. Alexander was accorded the title of protopresbyter (also called archpriest in some Orthodox jurisdictions, though in the Russian tradition from which Fr. Alexander came, the two are distinct honorary titles), the highest honor that can be bestowed on a married Orthodox priest. He held honorary degrees from Butler University, General Theological Seminary, Lafayette College, Iona College, and Holy Cross Greek Orthodox School of Theology.

He was an Orthodox observer for the Second Vatican Council of the Roman Catholic Church from 1962 to 1965.

In 1970, he was active in the establishment of the Orthodox Church in America, which at that time became officially independent from the Russian Orthodox Church, though its autocephaly has not been universally recognized.

His sermons were broadcast in Russian on Radio Liberty for 30 years. He gained a broad following of listeners across the Soviet Union, including Alexander Solzhenitsyn, who became his friend after emigrating to the West.

Fr. Alexander published many books and articles. For the Life of the World, a popular volume on Christian faith as reflected in liturgy, has been translated into eleven languages. Originally prepared as a study guide for the National Student Christian Federation in 1963, it even had an anonymous version published by the underground samizdat in the Soviet Union. The Eucharist was finished just before his death. This and several collections of his writings were published posthumously. 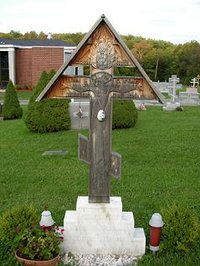 The grave of Fr. Alexander at St. Tikhon's Monastery

List of works by Schmemann yet to be sorted properly: