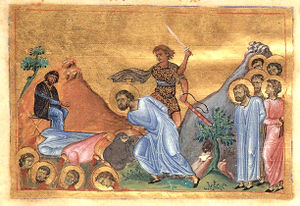 The Ten Holy Martyrs of Crete were a group of ten Christian men from Crete who suffered martyrdom during the persecutions of emperor Decius during the third century. They are commemorated on December 23.

During the reign of the Roman emperor Decius from 249 to 251, Theodulus, Saturninus, Euporus, Gelasius, Eunician, who all were from Gortyn, Zoticus from Knossos, Pompius from Lebena, Agathopus from Panormos, Basilides from Kydonia (Hania), and Evaristus from Iraklion refused to worship at the shrine of the deity of the emperor Decius as god of Rome. The ten were brought before the governor of Crete, also named Decius. At their trial they steadfastly confessed their faith in Christ and refused to worship the emperor and other idols.

The men were then imprisoned and tortured for one month. But the torture did not change their opinions, and they continued to glorifying God. They were sentenced by the governor of Crete to be beheaded. Before their death they prayed that the Lord would enlighten their torturers with the light of the true Faith. Their executions took place in Alonion, a part of Gortyn now known to have been the main amphitheater of Gortyn.

During the reign of emperor Constantine I, the bodies of the ten saints were reburied. The site of the reburial is reported differently. In one, St. Paul of Constantinople is said to have taken the relics of the holy martyrs to Constantinople to serve as a protection for the city, and a source of blessings for the faithful. Another relates to a 1981 discovery of a sarcophagi during rescue excavation in Alonion of Gortyn as the burial site.