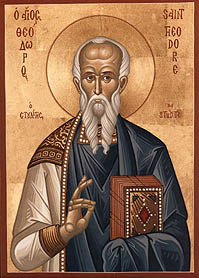 Our Venerable and God-bearing Father Theodore the Studite (759-826) was a hymnographer and theologian as well as the abbot of the Monastery of St. John the Baptist in Studios, outside of Constantinople.

Following the death of Emperor Leo IV (775–780) in 780, Theodore's uncle Platon, who had lived as a monk in the Symbola Monastery in Bithynia since 759, visited Constantinople, and persuaded the entire family of his sister, Theoktiste, to pursue the monastic life. Theodore, together with his father and brothers, sailed back to Bithynia with Platon in 781, where they set about transforming the family estate into a religious establishment, which became known as the Sakkudion Monastery. Platon became abbot of the new foundation, and Theodore was his "right hand." The two sought to order the monastery according to the monastic rule of of Basil of Caesarea.

During the period of the regency of Eirene, Abbot Platon emerged as a supporter of Patriarch Tarasios, and was a member of Tarasios' iconodule party at the Second Council of Nicaea, where the veneration of icons was declared orthodox. Shortly thereafter Tarasios himself ordained Theodore as a priest. In 794, Theodore became abbot of the Sakkudion Monastery, while Platon withdrew from the daily operation of the monastery and dedicated himself to silence.

Theodore had been a monk for approximately 20 years when he took the initiative to revive the almost extinct monastery of Studios in the imperial city of Constantinople. Under his care, it became one of the shining lights of Eastern Christianity. This did not deter successive emperors from banishing the faithful Theodore and exiling the community.

Theodore's revival of the Studios monastery had a significant impact on the later history of Byzantine monasticism. His disciple, Naukratios, recovered control of the monastery after the end of iconoclasm in 842. Elements of Theodore's Testament were incorporated verbatim in the typika of certain early Athonite monasteries and are in use to this day. The most important elements of his reform were its emphases on cenobitic (communal) life, manual labor, and a carefully defined administrative hierarchy.

Theodore also built the Studios monastery into a major scholarly center, in particular through its library and scriptorium, which certainly surpassed all other contemporary Byzantine ecclesiastical institutions in this regard. Theodore himself was a pivotal figure in the revival of classical literary forms, in particular iambic verse, in Byzantium, and his criticisms of the iconoclastic epigrams. After his death the Studios monastery continued to be a vital center for Byzantine hymnography and hagiography, as well as for the copying of manuscripts.

Following the restoration of holy icons, Theodore became one of the great heroes of the iconodule opposition.

His great theological contribution, On the Holy Icons, was written in defense of icons during the Second [[Iconoclasm}iconoclastic]] Period (814-842). He is also known for his writings and influence on monastic reform. His feast day is on November 11, and the transfer of his relics from Cherson to Constantinople in 845 on January 26.

He and one of his brothers, St. Joseph the Confessor, Archbishop of Thessaloniki (also called "Joseph the Studite"; 762-832; July 14 and January 26), are known for their work on the Triodion, the service book for the first three weeks of Great Lent. The first Lenten weekday canon is attributed to St. Joseph and the second to St. Theodore.[1]