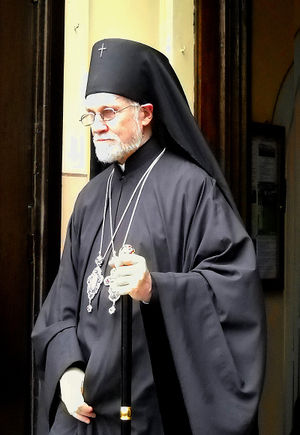 His Eminence Simon (Romańczuk) was the Archbishop of Łódź and Poznań of the Church of Poland from 1981 until his repose in 2017.

Szymon Romańczuk was born on October 12, 1936, in Gusczewina near Hajnówka. In 1955, he began studying philology in Minsk and from 1965 he studied on Christian Theological Academy (ChAT) in Warsaw.

He was tonsured on February 11, 1970. Then on February 15, he was ordained to the diaconate. On February 22, he was ordained a priest. On February 21, 1970 he was assigned as an inspector to the Orthodox Spiritual Seminary in Warsaw. One year later, he took office of president of the Publishing and Press Committee of Metropolitan Council. Since 1971, as a representative of Church of Poland or as a member of official delegation, he took part in many conferences. In 1973, he was elevated to Igumen, in 1979 to archimandrite. In October 1979 he was given the title of Honorary Member of the Orthodox Academy in Crete. At the Christian Theological Academy (ChAT) in Warsaw he received Ph.D. for the topic: Orthodox in Literary Output of Dostoevsky.

On November 26, 1979 at the Cathedral of Mary Magdalen Equal to the Apostles he was consecrated to the episcopacy, with the title of Bishop of Lublin, as a vicar of the Diocese of Warsaw and Bielsk. On August 18, 1981 he was nominated ruling bishop of Lodz-Poznan Diocese. On June 8, 1993 Bp. Simon was elevated to Archbishop.

He was a lecturer at the University of Łódź and a member of Science Board edited in Łódź lexicon Idaes in Russia. His Eminence reposed in the Lord in June 28, 2017.