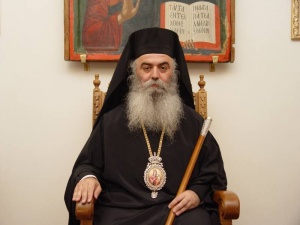 John Papakostas was born in 1959 in the village of Agnantero in Karditsa prefecture in Thessaly, Greece. After completing his education in theology at the University of Athens, John entered the Holy Orders. In 1983, he was ordained a deacon with the name Seraphim. In 1987, Dcn. Seraphim was ordained a priest. Following his ordination, Father Seraphim served in the Directorate of Youth in the Archdiocese of Athens, from 1990 as the head of Protocol followed as Secretary of the directorate.

In 1996, Father Seraphim was elected to the episcopate. He was consecrated Metropolitan of Kastoria on October 5, 1996.