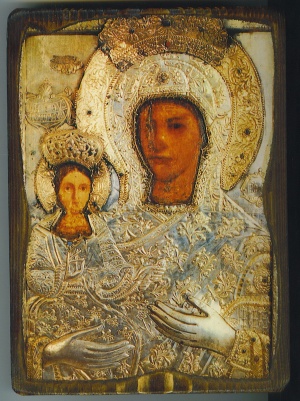 the icon of the Virgin of the Caves (Samos)

The icon of Panagia Spiliani, or the 'Virgin of the Caves' is a version of the icon of the Virgin Mary that has become associated with two places in Greece. These places are in Samos and Nissiros.

A little to the northwest of Pythagorion, on the island of Samos, there is a monastery of Panagia Spiliani (the Cave of the Virgin Mary) with 95 steps that lead down into a big cave with a church that is dedicated to the Virgin Mary. Inside this church it contains a very faded and old tiled/marble icon of the Panagia Spiliotisa, which was also called Panagia Kaliarmenissa (the good traveler). This name is explained by the following legend. The icon had been stolen by strangers who were taking it to there home town. As they were unloading from the boat, the icon fell into the sea and broke into five pieces. Over a long period of time, these pieces, carried by the sea, returned to the island of Samos. The locals collected these fragments and the icon was restored and returned to its original location.

The caves were originally used to extract blocks of massive limestone to build walls and many buildings for the town of Samos. During the Roman period, these caves were used by a female diviner named Fyto. The cave was turned into a religious monument some time after this period. During the Ottoman period of occupation, the locals used the caves to hide the woman and children of the island.

Another interesting feature of these caves is the large pool of Holy Water found in the cave and a Christian cross as a relief on the wall of the cave. This monastery is also a dependency of the Hozeviotissa monastery of Amorgos.

This monastery is located on the northwestern side of the harbour of Mandraki on a 30m high rock and dates from around 1600 AD. During the Turkish occupation it issued currency for the transactions of the Nissyrians and in 1823 it took part in the General Assembly of Greece. There are 270 steps that lead up to the holy cave which still contains the miracle-working icon of the Blessed Virgin. There are two churches; one has been dedicated to the Assumption of the Virgin and the south church is dedicated to St. Haralambos. According to tradition, a local farmer discovered a small cave, around 1400 AD, with an icon of the Virgin Mary inside this cave, near the hot springs of Mandraki on the island of Nissiros. He took this icon to the church of Panagia Potamitisas (the Virgin of the Rivers). The next day, the icon was missing. They supposed it to be stolen but after a few days it was rediscovered by the locals in a cave on a 30m high rock. Again they took the icon to the church of Panagia Potamitisas but again the icon went missing and was rediscovered in this same cave on the rocks. This happened three times until the locals decided to transform the cave into a church and leave the icon in its preferred location. This cave has been called Panagia Spiliani and the monastery is built immediately above this cave. The locals of Nissyros dedicate this icon as the protectress of the island.