On December 24, 1949, he was baptized in Holy Trinity Serbian Orthodox Church, which had been consecrated by Saint Tikhon in 1905, during his tenure as Archbishop of North America. Upon graduation from high school in 1967, he enrolled in Christ the Saviour Seminary, Johnstown, Pennsylvania.

His Grace, Bishop Nikolai of Baltimore, Auxiliary to Metropolitan Theodosius, began overseeing the life of the Diocese in June 2001 after the transfer of His Grace, Bishop Innocent to the auxiliary see of Hagerstown, MD[2]. 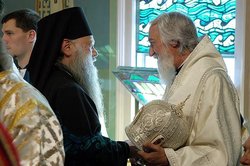